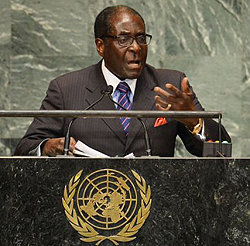 ROBERT Mugabe is the greatest patriot and hero that has ever lived. He is the only leader that ever re-possessed land and deported the usurpers whilst they were in full occupation, and well-armed, resistive and prosperous.
Those foreigners were very powerful imperialists. They had become accustomed to simply printing title deeds in order to lay claim to any real estate within their “empire”.
In this way, the white farmers of Rhodesia were transformed from the Hoi polloi of the United Kingdom into the Squires of Rhodesia. They ended up as an opulent, hubristic, elegant, and sophisticated landed gentry. They were the sun-kissed monarchs of Rhodesia.
They possessed the title deeds for the finest agricultural land upon which the established 70,000 mega-farms. And they farmed the land for 110 years. They waxed rich, even to a point that exceeded the avarice of their own dreams.
But the physical labour was provided by the natives of the country. And these people were virtually enslaved. For over a century, they were serfs who stagnated   in a condition of sub-humanity.
They were the tattered lackeys whose only reason to exist was to serve their white masters. They were the under-fed, shabby, unwashed, un-schooled, bare-footed tattered lackeys.
Then Mugabe arrived on the scene! He was a highly-educated, scholarly and erudite politician. He was a highly-focused, rebellious mono-maniac. When the white farmers threatened him and his organisation, ZANU, he stentoriously trumpeted his defiance.
And when the white farmers used their firearms and their military might, there was no constitutional way for Mugabe to defend himself. So he resorted to methods that disrupted and terrorised the entire farming community.
Within a few years, the entire country was discombobulated and Ian Smith  realised that Mugabe was unshakeable.
Mugabe is the only native leader who ever re-possessed territory that was usurped by foreign colonisers. And he did so whilst they were in full occupation and whilst   they were actively farming and prospering.
Mugabe also vowed to expel the foreigners and when their exodus was evolving, he expedited their repatriation.
Mugabe’s triumphs were unique. No other native leader has ever re-possessed land whilst the purloined real estate was actively occupied by the usurpers. Mugabe did it! And he did so single-handedly!Advertisement

Comparisons are always odious, and at the risk of sounding mean-spirited, I aver that African politicians have been a ruination to their own people. With a very few exceptions [Nkrumah, Mandela and Machel], they have been self-anointing and intoxicated with prestige, power and opulence.
In any event, they did very little to denounce the white farmers or the British. And they did nothing to assist Mugabe. Mugabe’s neighbours stood by as mute spectators. Others were loquacious, but contributed nothing except lip service.
Opportunists such as Morgan Tsvangirai were the willing puppets of his enemies. But the natives of Zimbabwe trusted Mugabe and emulated his defiance. They saw the likes of Tsvangirai as transparent frauds and failures.
The white Rhodesians led by Ian Smith controlled a well-equipped and modern army and an Air Force. And the white Rhodesians were blatantly and raucously supported by the governments of the United Kingdom. And the rest of the Western world.
Although Ian Smith appeared to fight like a tiger, he realised that the white farmers were destined to fail. So he furtively stashed away a tremendous personal fortune in real estate and cash stored away in various foreign banks. Many in the Rhodesian intelligence services, which had hundreds of “safe houses” across Africa, simply helped themselves to this fortune, then retreated to South Africa where they retired in opulence and relished the Apartheid culture.
Almost every politician has access to the coffers of the nation, and some malfeasance is inevitable. I don’t know Mugabe personally, but I would not trust him with my credit card or cheque book because he is, after all, a mere mortal with foibles.
But, even if evidence can be adduced to prove that Mugabe had “dipped into the cookie jar, such a peccadillo must not be allowed to detract from, or eclipse the superlative accolades to which this great patriot is fully entitled.
The white farmers were aided and abetted by the news-mongers who delineated Mugabe as the ruination of Zimbabwe and as the devil incarnate. It is our moral obligation to discredit the demonisation and the character assassination of Mugabe. We should neutralise those negatives by relying upon simple truth.
We must offer monetary compensation to the exiled white farmers. They will be required to present authenticated documentation to indicate the price that they had paid for the land, as well as such documentation as will indicate that the seller was a native who was entitled to sell the land.
And then we must flaunt Mugabe as a patriot and as a hero who triumphed over gargantuan odds. We must do so by means of statues and posters, video documentaries, full-page newspaper exposure on a weekly basis for two years, re-name highways after Mugabe, re-name Victoria Falls, Kariba Dam and Lake Victoria after Rober Mugabe.
I have set up a Foundation that will attempt to saturate sub-Saharan Africa with the truth about the white farmers and Mugabe. I will place a statue and posters of Mugabe in the town square of every city, major airport and railway station.

Bumper stickers will be made available and pamphlets will be distributed throughout. The full story will be etched upon these items and on statues.
It is your moral obligation to contribute your energies, your cash, and your ideas.
Dharma Appavoo is the president of the Buddhist Group of North America. He can be contacted on e-mail: buddhablaster@gmail.com