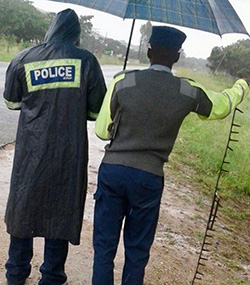 Robert Rotberg – founding director of Harvard Kennedy School’s Program on Intrastate Conflict – relates his experience on a visit to Zimbabwe.

WE had just arrived at Harare International Airport from less troubled and far less corrupt parts of Africa when we came face to face with the daily punishments that Zimbabwe’s government metes out to its own hapless citizens.
Our local car was a mere 100 metres beyond the terminal when the vehicle, along with many others, was flagged down at a police roadblock, a.k.a. a police shakedown point. Constable F. Moyo sternly checked for the car’s fire extinguisher and its precise placement, for the two emergency plastic triangles with a serial number that all must carry, and for the green fluorescent safety vest that must be available at all times. The fire extinguisher was there, but Constable Moyo did not like the way in which it was affixed inside the car’s boot.
“Aha!” said Constable Moyo. “I shall charge you $30 (U.S.) for that offence.” But, said the driver and passengers, the fire extinguisher was where it was supposed to be. “No,” said Constable Moyo, “regulations have changed.” It was another gotcha moment, since the rules are “altered” whenever the roadblock personnel wish, depending on the circumstances of the traffic stop. The fact that no other country has such arbitrary and fanciful requirements testifies, too, to the avarice of officials at all levels more than it does to a regard for automobile safety.
Constable Moyo did not offer to write up a traffic ticket and give it to the driver. That would have limited his personal on-the-spot profit, the entire point of the roadblock. The driver, who was uncomfortable bribing the constable, initially resisted paying the bribe. “I have no money,” he said. So Constable Moyo grabbed his driver’s licence and walked away. He also tried to take the driver’s car keys. There was menace aplenty, but no actual violence.
Constable Moyo also said that he was proud of his reputation as a fleecer of drivers. “You will find me on Facebook,” he said. “I am famous for dealing with you people.”
After 30 minutes of waiting, over the driver’s protests, I crossed the busy road to the place where Constable Moyo was stopping other cars on made up pretenses and, after intense bargaining, offered him a crisp $20 bill (not $30) on condition that he hand back the licence.Advertisement

Our roadblock was but one of perhaps 50 to 60 or so that spring up daily around Harare, the once beautiful but now decaying capital of Zimbabwe. Each one provides an opportunity for already well-paid policemen to shakedown motorists, many of whom now use a mobile phone app to locate and avoid the latest blockades. Still, the motoring hassles and extortion with impunity continues unabated. Police inspectors-general may promise to contain the Constable Moyo’s of Zimbabwe, but in fact they receive proceeds from the system of extortion which, along with all manner of other bribe-collecting schemes (to obtain birth certificates, marriage licences, permits to import furniture, etc.) that plague the citizens of Zimbabwe.
Since corruption always begins at the top, not from the bottom, and since we know that venal or grand corruption has ripped over Zimbabwe with tsunami force since about 1995, Constable Moyo, scamming for bribes as he does, reflects much that is pernicious about Zimbabwe. His actions also betray, at the personal level, the destruction that autocratic President Robert Mugabe, now 93, has wreaked on Zimbabwe since 1980.
Under Mr. Mugabe, who threatens to run again for President in 2018 despite his age and evident frailty, Zimbabwe has slipped backward to become among the poorest African countries. Corruption is at the core of the country’s rot – every position, every transaction, is imbued with it. No road is built, no political or official appointment made, without opportunity to profit.
As evidence of the national collapse, fully a third of Zimbabwe’s 16 million people have fled to South Africa, Botswana, Zambia, and Mozambique. Its economy has been reduced to 1953 performance levels. In an echo of the wild inflation of 2007-2009, Mr. Mugabe’s government has introduced its own nominal paper dollar “bonds” that are now only worth 50 cents. With only 4 per cent of bank deposits covered with real money (the U.S. dollar or the South African rand), the country lurches from financial chaos to widespread hardship.
Until Mr. Mugabe’s regime ends, and Zimbabwe is governed honestly, Constable Moyo and his ilk will continue to prevail, and ordinary citizens shudder.
Robert Rotberg is founding director of Harvard Kennedy School’s Program on Intrastate Conflict, Senior Fellow, CIGI and president emeritus, World Peace Foundation.