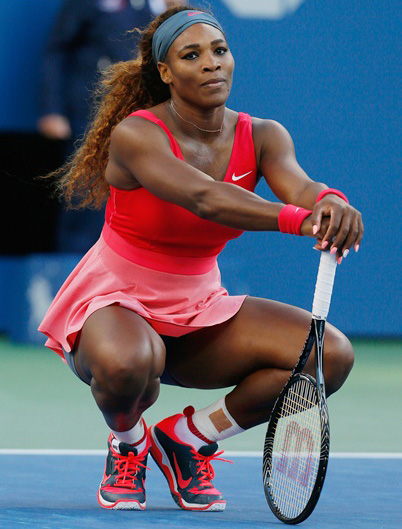 Yes, not identical ones but fraternal tennis twins for sure!
ROGER Federer and Serena Williams are undoubtedly the two most adorned tennis players in the history of the sport. They have scripted history time and again making them so formidable that at times they seem indispensible and almost bigger than the sport itself. While one is the best from a handful of great tennis players from his nation, the other is the torchbearer of a pantheon of Champions from her country. While studying the journey, that they have traversed with a zeal so humungous and a passion so unwavering, it is hard to not take note of the similarities between these two greats!
The Serve
The Serve, their most potent weapon, not only starts a point but also finishes it on more occasions than one. They both possess so much power and venom in their serves that opponents seldom find any answers to them. Both Roger and Serena often get themselves out of trouble by serving aces – down the T, out wide or the kicker. You name it and they “serve” it to you on a platter with a lot of ease and élan.
Their service motions are natural and effortless that are high on impact and easy on the eyes. Martina Navratilova considers Serena as the greatest server of all time. The serving extravaganza that Roger displayed in the Wimbledon Finals of 2009 against Andy Roddick can never be forgotten. He ratcheted up 50 aces, equivalent to 12 games, in that Finals which is the longest ever in the history of Wimbledon. In fact, this year Roger surpassed the 9000th aces mark and is just the fourth man to have achieved this feat.
Serena emulated something similar when she bulldozed her opposition with a total of 102 aces in the 2012 edition of Wimbledon. Their serves are also very well placed. While Federer, off late, relies more on accuracy than power, Serena is all raw power.
Play smart
Their games are purely cerebral. Their court sense is so supreme that they use every inch of it, including the outer edges of tramlines. Court craft, driven by sound strategy and executed with finesse, is core to their styles. Both of them believe in first strike tennis!
They take initiative and dictate points in their matches, more often than not. Off late they both approach the net quite frequently to keep the points short. This has helped add to their aggression and contributed, over time, to their longevity and relevance in the sport. Their choice of shots and ability to play committed tennis is what helps them perch at the pinnacle of the sport.Advertisement

Plan smarter
It has been observed that Roger, at his peak, skipped quite a few Masters Events to guard himself from burn outs. He skipped Rome Masters in 2014 and skipped the Davis Cup as well as Miami Masters in 2015 to keep his body intact and capable of winning an 18th Grand Slam title. In the Barclays World Tour Finals 2014, Roger withdrew from his finale against Djokovic due to a back injury and the decision to do so helped him reap rich dividends a week later. He thus added to his impressive resume – the elusive Davis Cup!
Serena also chooses her tournaments wisely. She withdraws from the smaller tournaments, like she did in Indian Wells this year, due to the smallest of niggles. She focuses a lot on Grand Slams, plays big and wins them. This has worked wonders for her so far as she is making an attempt to breach Steffi Graf’s record of 22 Grand Slams.
The Aura
Whether they are on court or off court, they have the aura of The Boss!
On court while Roger is regal, Serena is brutal. While Roger embodies swagger, Serena exudes invincibility. Federer was the ATP Player Council President for six years. He managed to get a lot accomplished for the players and the sport during his tenure. In the fourth round of Roland Garros 2014, Gulbis asked Roger’s permission before taking a medical time out.
The Entertainment Quotient

Not many players on the cicuit are very entertaining to watch. Apart from a few names like Gael Monfils and Agnieszka Radwanksa, even big names like Andy Murray and Tomas Berdych rank low on the entertainment quotient.
Roger is a sheer joy to watch and is poetry in motion. Serena on the other hand is the warrior queen. Their entertainment quotient stems from the variety of shot making that is part of their repertoire. Almost every shot is different from another in pace, length, angle, trajectory, spin and power. Unlike many other players who only prefer to club the ball from the baseline, these greats have a game style that comes as a whiff of fresh air.
Doubles Expertise
Roger and Serena are blessed with tennis instincts that not many players can boast about. They have not only excelled in Singles but also have achieved a lot of feats in Doubles. Their supreme net play and court sense is what helps them be very effective and suitable for doubles. Williams has an inherent advantage in the form of a sister and doubles partner, Venus Williams, with whom she grew up hitting with and learning from. Serena has to her credit 13 Grand Slam Doubles titles and 3 Olympics Gold Medals that she won alongside Venus. Federer on the other hand, also has found success in Doubles while partnering compatriot Stan Wawrinka. They won a Gold Medal in Beijing Olympics and also helped Switzerland secure their maiden Davis cup ties last year.
Achievements and Riches
No matter how much time and effort one may want to dedicate to chronicling their achievements, one may always fall short of doing justice to the herculean task. While Roger is already considered, by many, to be the G.O.A.T among the male tennis players, Serena is just 3 Grand Slams shy of being called one. Both these legends feature in the Forbes list of richest athletes year after year.
Africa – at the heart of their philanthropic activities

South Africa is very special to Roger as his mother Lynette Federer hails from there. Roger spent a few of his formative years, albeit on and off, in South Africa. Along with UNESCO the Roger Federer Foundation has done commendable work over the years in countries like Botswana, Malawi, Namibia, South Africa, Zambia and Zimbabwe. Their focus has largely been on Education.
The Serena Williams Foundation has also laid a lot of emphasis on Africa and Education. Her foundation has built schools in Kenya and along with a non-profit organization called Build African Schools aims to build one school every year in a different African country.
Their Destiny Numbers
Many athletes around the world are superstitious and believe in lucky charms. For astrology and numerology buffs, it is interesting to note that both Roger and Serena are ruled by the Number Eight. Their Birth Number is also eight as Roger was born on August 8th and Serena on September 26th (2+6=8). Even their names start and end in the same letter – Roger FedereR, Serena WilliamS.
As per a recent article written by a fellow Sportskeeda Author, Roger supposedly carries eight racquets with him, sets up eight bottles of water courtside, wants to serve eight aces during his pre-match warm up and makes sure of eight towel rubs at the end of a set.
The Run of Dominance
Roger and Serena were born just a month apart. At 33, their run of dominance that they have had over the years is mind boggling. Both have achieved the career Grand Slam.
Federer has been No.1 for a record 302 weeks. Federer is still doing well enough to hang on to the No.2 ranking and with 85 ATP titles to his credit he stands third in the total number of titles won in the Open Era. In 2006, Federer said that he felt like Pacman as he won almost every tournament he played. Federer won 15 out of his 17 titles between 21 and 28 years of age. Roger secured his 1000th win at the Brisbane Open Final this year.
While Serena, the current World No.1, has strengthened her stranglehold on the top position for almost 240 weeks now. Serena dominated 2013 as she held a win loss record of 81-4 for that season. Serena’s titles are spread out quite evenly over the years and she has managed to win at least two of each Grand Slams. Serena recently secured her 700th win.
This article was originally published by Sportskeeda.com