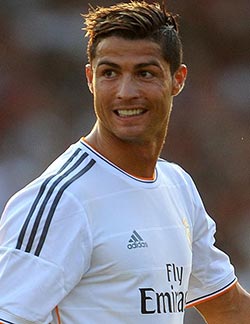 NOT content with setting a record of 17 goals for one edition of the Champions League last season, Cristiano Ronaldo is already well on the way towards breaking Lionel Messi’s La Liga best haul of 50 goals in one campaign.
Ronaldo netted his third hat-trick this term in Sunday’s 5-0 drubbing of a sorry Athletic Bilbao at the Bernabeu, taking his overall tally to an outrageous 13 in six appearances in 2014-15.
The insatiable Ronaldo – who has missed one game so far – is currently averaging 2.167 goals per match. If he maintains such a scoring rate and plays every remaining game this season, the forward will, quite remarkably, reach the 80-goal mark.
Such a tally is of course nearly impossible to reach. For one, it would depend on Ronaldo avoiding any kind of injury for the next six months, as well as maintaining his superhuman form over a whole season.
But there is every reason to suspect he could dwarf Messi’s Spanish record of 50 goals, set in 2011-12.
Messi’s half century set a new record in itself after eclipsing the 47 goals scored by Dudu Georgescu for Dinamo Bucharest in 1976-77, the previous high watermark for the European Golden Shoe award.
But before the inception of the Golden Shoe award, Dixie Dean famously scored 60 goals in the 1927-28 season for Everton – a historic and iconic tally which appears to be well within Ronaldo’s grasp.
Sunday witnessed the Portuguese World Player of the Year’s 22nd treble for the European champions, equalling the La Liga record jointly held by Alfredo Di Stefano and Telmo Zarra, and putting him three clear of Barcelona forward Messi’s hat-trick haul.
On a night when he again appeared simply unstoppable, Ronaldo unselfishly set up Karim Benzema to score and Gareth Bale made two assists as Real’s formidable attacking trio known as “BBC” destroyed the struggling Basque side.
But it was his goalscoring which made the world stand up and pay attention again
“The three up front played fantastically,” coach Carlo Ancelotti purred at his post-match news conference. “When they are in that kind of mood they are fundamental for the team,” added the Italian.
Ronaldo broke Messi’s four-year stranglehold on the FIFA Ballon d’Or when he was voted 2013 World Player of the Year and Ancelotti said he had little doubt the Portuguese would claim his second straight award and third overall when the 2014 winner is announced in January.Advertisement

“This year, I don’t think there is much doubt,” Ancelotti said. “I don’t think there’s any point in even talking about it.”
Messi is the only player who can come close to challenging Ronaldo and the Argentina captain’s performance at the World Cup, when he led the South American nation to the final, may give him an edge.
Ronaldo, who was clearly struggling with injury, had a subdued finals in Brazil as Portugal failed to advance beyond the group stage.
However, in terms of La Liga goalscoring supremacy, there is no contest at present. Messi ‘only’ has six goals in seven games and looks set to lose one of his most cherished records to his great rival.