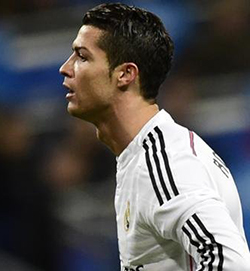 REAL Madrid coach Carlo Ancelotti says he is not worried by Cristiano Ronaldo’s recent sharp drop in form as the holders prepare to play at Schalke 04 in the Champions League on Wednesday.
Ronaldo made a blistering start to the season and looked well on the way to breaking the record for La Liga goals in one campaign of 50 set by Barcelona forward Lionel Messi in 2011-12.
However, the Portugal captain has only managed four goals since the turn of the year and Saturday’s blank in Real’s 2-0 win at home to Deportivo La Coruna means he has failed to score in three consecutive La Liga matches for the first time since February 2011.
To be sure, he was short on luck at the Bernabeu, with one shot rattling the crossbar in the first half, but in recent weeks he has looked a shadow of the player who terrorised defenders in scoring a record 17 goals in last season’s edition of the Champions League.
“He didn’t score but he was dangerous,” Ancelotti said at a news conference after Real stretched their lead over second-placed Barca at the top to four points.
“A crossbar, an assist (for Karim Benzema), he could have scored, he didn’t miss passes and the technical evaluation of his match is positive.”
Ancelotti will need Ronaldo back to his best soon if Real are to secure a record-extending 11th European crown this term.
It was a difficult week for the former Manchester United player, who was widely criticised after photographs leaked into the media of him and some Real team mates enjoying his 30th birthday party hours after last weekend’s humiliating 4-0 drubbing at Atletico Madrid.
Mister Chip, who collates soccer statistics, noted on Saturday that Ronaldo has suffered a loss of form after collecting each of the last two FIFA Ballon d’Or awards.
He scored 14 goals in the 10 games before the 2014 award and six in the 10 matches after, and for the 2015 award netted 12 goals in the 10 games before and only four after.
Real at least managed a win before their trip to Germany, unlike Schalke who were beaten 1-0 at Eintracht Frankfurt in the Bundesliga on Saturday.
Real knocked Schalke out of the Champions League at the same last 16 stage 9-2 on aggregate on their way to a 10th continental title last term.Advertisement