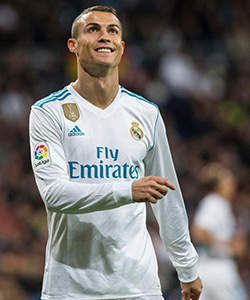 WORLD player of the year Cristiano Ronaldo rejected a world record £257million (300m euros, $317m) bid from China, his agent Jorge Mendes has claimed.
Mendes told Sky Sports Italia on Thursday that the unnamed Chinese Super League side had offered the 31-year-old Portuguese superstar a record £85m a year as salary.
“From China, they’ve offered 300m euros to Real Madrid and more than 100m (euros) per year to the player,” said Mendes.
“But money is not everything. Real Madrid is his life. Cristiano is happy at Real Madrid and it is impossible to go to China.”
China has through its Super League clubs flexed considerable financial muscle in the international transfer market, most recently buying Brazilian international Oscar from Chelsea and Argentinian veteran Carlos Tevez — with the latter reportedly set to earn 38million euros a year.
However, Mendes said the star of his stable was out of reach.
“The Chinese market is a new market,” said Mendes.
“They can buy a lot of players, but then again it is impossible to go for Ronaldo.
“Cristiano is the best player in the world and best ever. It is normal to have some offers.
“He won the European Championship with Portugal, it’s like winning the Italian league with Genoa: they were not the favourite,” added the 50-year-old Portuguese.Advertisement