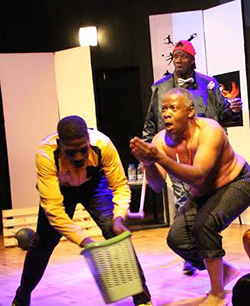 ROOFTOP Promotions’ latest production, Juju Soccer, goes on tour after several successful runs in Harare.
After a successful one-week run in Harare at the Old Mutual Alliance Francaise Theatre, the three-hander was also showcased at the Protest Arts International Festival.
The play will kick off the tour on the 19 December in Hwange, before moving to Bulawayo the next day for the Ibumba International Festival.
“Rooftop Promotions is using the play to kick start the coming 2015 season which promises to be hectic as the producers have finalised  going through 200 scripts that were submitted by productions houses, organisations and individuals.
“In Juju Soccer, our revered playwright, Stephen Chifunyise brings to the fore the touchy and contentious subject of the perceived usage of juju and superstition which has been an emotive subject in the beautiful game of football the world over,” said Robert Tapfumaneyi, the organisation’s publicist.
The use of Juju is common with African football teams as they employ extra powers to defeat their opponents.
In Zimbabwe, several top flight football teams have been accused of using magical powers in some of their matches.
How Mine Football Club hit the headlines last year after Caps United officials forced their way into the latter’s dressing room, during Mbada Diamonds Cup semi-final match between the teams at the National Sports Stadium.
Burning candles surrounded by bottles with liquid in them were found in the dressing room.
“I felt for the coaches as religion was often in conflict with traditional beliefs and vice versa. I followed stories like those of (Kevin) Kaindu and just used an everyday issue and decided to look deeper into it by way of a script,” said play writer Chifunyise.
The cast features some of the revered theatre actors in the country in the legendary Daves Guzha, multi-award winner Mandla Moyo and Teddy Mangawa, who has featured in many Rooftop Promotions productions.
Godobori Musanawenzou (Daves Guzha) is loud spoken, over-confident, strict, instructive, expensive, overbearing and very boastful of his achievement whilst Extratime Chigumbo, (Teddy Mangawa) is a highly qualified coach but with little experience in local soccer coaching and having been an assistant coach in Germany and Sweden of a low division football club. Advertisement

He is a thoughtful, thorough, respectful and principled professional, with strong self-belief and confidence in his coaching methods. He is a keep fit fanatic who is constantly exercising. He is a family man who is constantly in touch with his children and wife.
Godknows Zidumburemombe, ably played by Mandla Moyo, is chairman and founder of  Kambuzuma United  Football Club of Harare. A prominent businessman and former football player, he is pompous, superstitious and a very ambitious man.