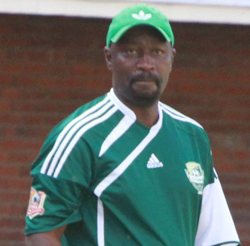 FIRST timers in Africa How Mine have a lot to prove when they meet Chouni of Zanzibar in the first leg, preliminary round of the CAF Confederation Cup at Barbourfields Stadium on Saturday afternoon.
They came into the Premiership last season backed by solid sponsorship from Metallon Gold Zimbabwe-their principal sponsors and hired one of the most qualified coaches in the land in Philani Mabhena.
They were ambitious and set themselves high standards, raiding the market for such stars as Ephraim Mazarura, Hebert Dick, Gilbert Banda, Mernard Mupera, Ntokozo Tshuma, Simon Njeleza, Thabani Moyo, Nqobile Mpala, Khumbulani Banda and Brighton Dube.
This was in addition to Simba Sithole, now at Ajax Cape Town, who had played a huge part in their promotion.
But the football world really took notice when they completed a double over Highlanders, under Philani Ncube, in the league before booting Dynamos out of the Mbada Diamonds Cup at Rufaro in the quarterfinals.
In the semi-finals when everybody thought Caps United would roll over the miners, Ncube’s side brewed a shocker at the National Sports Stadium to reach the final.
Reaching the final was their ticket to Africa. Fespite losing 0-3 to Bosso in the final they were given the green-light to represent Zimbabwe because Highlanders serving a CAF
ban.
In preparation, How Mine have raided the market again this January and brought in Kuda Musharu, James Chitereki, Heritani Masuku, Godfrey Nguwodzawo, Benjamin Marere, Fungai Chirinda, Morris Kadzola, Courage Denias, Nicholas Alifandika, Marvelous Samaneka, Wonder Sithole and George Magariro, among others.
But the huge investment means Ncube is in the line of fire if the results fail to come.
“I have faith in this squad. There is no doubt that we are going to Africa to compete not just to add numbers,” said Beefy when naming his squad for the competition.
But his biggest test comes this afternoon against the little known Zanzibaris, who are also not making up the numbers in the Confederation Cup.
Still, Ncube has the arsenal though to win the match with the likes of Mupera, Gilbert Banda and Dick having vast experience in Africa while the finishing, in the absence of Sithole, could be a little cause for concern at this stage.Advertisement

This might mean Musharu has to be the gunman with supporting links in Warren Dube and Samaneka.
Banda, who has seen action in Africa with Highlanders and FC Platinum and also captained the Warriors at Chan 2009, said a healthy first leg lead would do the trick.
“We need to avoid conceding at home and maybe try to get three goals from the first leg; that will make the second leg much easier.”