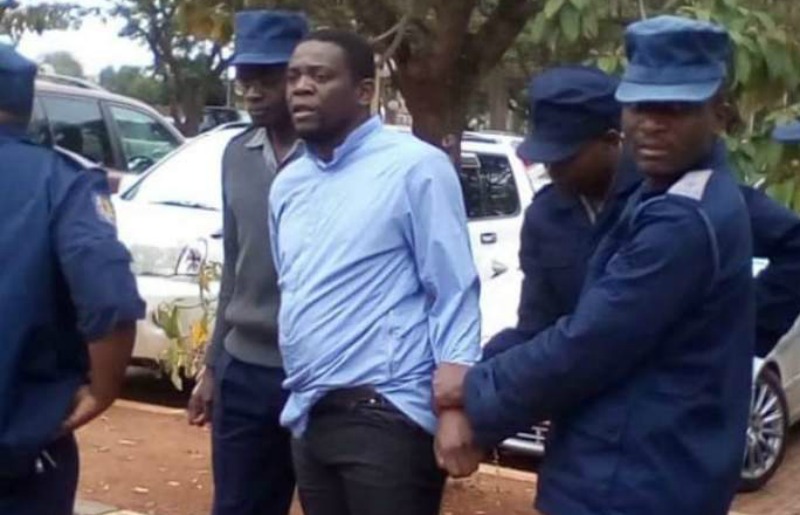 Proceedings came to a standstill and chaos reigned at the peace pledge signing ceremony when leader of #1980 Free Zimbabwe Movement protested at the Harare International Conference Centre auditorium Tuesday.

Francis Danha had to be dragged out by police officers after he continued to shout demanding that the Zimbabwe Electoral Commission (ZEC) chairperson must not be given a chance to deliver her solidarity speech at the event.

Danha said as political parties they were not happy with her conduct and had serious issues with her office as she is even failing to produce a proper voter’s roll something which even Grade One school teacher could have done.

Attempts by the National Peace and Reconciliation Commission (NPRC) chairperson retired Justice Selo Nare to have him sit down made things worse as Danha as journalists scrambled to capture his protest.

“We appreciate what you are saying and as the commission we are appealing to you to sit down so that proceedings can go on,” pleaded Justice Nare.

But Danha would have none of it saying as long as Chigumba was still on the podium the programme was not going to go ahead.

“Chigumba is out of order and she cannot come and address us, we are citizens of this country and we have rights,” he shouted back.

“I demand on behalf of all political parties to speak first before her.”

Nare then told him that he was not invited to speak because he did not attend the first meeting.

“You are not on the list because you did not come to the briefing,” Nare said.

Danha then responded by raising an invitation card showing that he was in the auditorium by official invitation.

The NPRC chair then ‘ordered’ him to finish his remarks so that proceedings could go ahead.

“My point of order is we have raised concerns about this meeting that this programme is out of order in the sense that you are expecting leaders of political parties only with presidential candidates contesting to do their speeches,” Danha said.

“So as political party leaders we must also be given the chance to speak before the ZEC chairperson speaks.”

“So this is my point of order Chair, I am saying give the political parties the chance to freely speak before you give the chance to some people like the ZEC chairperson.”

He added, “Because we have serious grievances about this election (2018) and you give her the chance to speak, this is an insult to all political parties.”

“The structure of the programme should be changed or this will not go on.”

Five ZRP officers then dragged him out.

Last week he did the same at the All Political Parties meeting with ZEC and the meeting had to be adjourned to a later date.