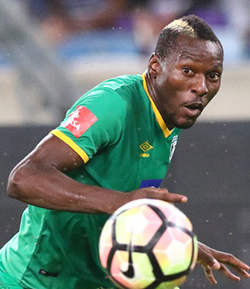 SOUTH Africa: First Division club Royal Eagles have turned down the option to bring in Zimbabwean striker Cleopas Dube following his sudden release by Baroka.
Kosta Papic, the Eagles coach, says Dube came to the club at the wrong time.
“We have been doing a lot of running and less of football so it is difficult to assess a player in this situation,” Papic tells KickOff.com.
“So us not bringing him in had nothing to do with his capabilities. It was just a matter of that he came in at the wrong time and it was at a time when we had already made a decision that we want to trim the squad to 28 players.
“However, I think he is a good player but then at this moment he couldn’t join us after he trained with us for a few days.”
The 26-year-old had his contract terminated by Baroka last week following claims that he failed to arrive back at training on time following the festive season break.Advertisement