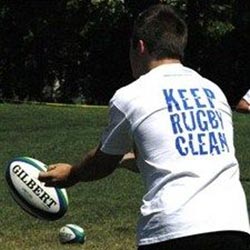 AS part of its commitment to the fight against doping in Rugby, the International Rugby Board (IRB) is visiting Zimbabwe for the annual Dairibord Schools Rugby festival to be held in Harare.
The tournament, which runs from May 6-10, is one of the largest schools Rugby festivals in the world with more than 150 schools taking part. The festival will be run under the theme “Growth-from community development to a culture of sporting excellence” at the Prince Edward School in Harare.
The top 18 teams, including coaches, managers and support personnel, will attend one of several Anti-Doping workshops on Keep Rugby Clean (KRC) day.
These run in conjunction with other Anti-Doping initiatives, including KRC t-shirt giveaways and a World Anti-Doping Agency (WADA) outreach booth, over the course of the five day festival. The aim is to raise anti-doping awareness among Zimbabwe’s youth Rugby movement.
Speaking at the event, IRB Anti-Doping Manager for Testing and Education Ilaria Baudo said: “Education is a key component in the fight against doping. Keep Rugby Clean day is an excellent opportunity to inform young players of the pitfalls associated with doping.”
“Unfortunately when it comes to anti-doping, Zimbabwe has been forced to learn from negative experiences in the past, but I’m really impressed with the work the Union has done recently to educate players across all levels.”
“The effort the ZRU has put in, even translating the IRB anti-doping handbook in two of the local languages, Shona and Ndebele, sets a fine example that many other Unions can follow.”
The festival’s anti-doping initiatives are being run with the support of the Zimbabwe Rugby Union, Zimbabwe Olympic Committee, IRB, WADA and Africa Zone VI Regional Anti-Doping Doping Organisation (RADO).
IRB Vice-Chairman Oregan Hoskins said: “The issue of anti-doping enjoyed top priority on this visit culminating in a meeting with the Ministry of Sport.
“IRB anti-doping should be commended for their message of zero tolerance towards doping. It is balanced against Rugby’s desire to be proactive in spreading health and wellness.”
“It’s important that the IRB gets the opportunity to inform all Unions about the hazards of using drugs in sport-not just for players but also for administrators. The sessions here in Harare are extremely valuable to the Zimbabwe Union and I expect they will benefit in the long term.”Advertisement

Recent cases in Zimbabwe have highlighted the inherent dangers of steroid abuse and the need for players, especially age-grade players, to educate themselves of the risks involved in taking prohibited substances.
The most recent involves Shane Joubert who has been sanctioned for six years for his involvement in the supply of prohibited substances to two members of Zimbabwe’s U20 squad that participated in the IRB Junior World Rugby Trophy 2012 in Salt Lake City, Utah.