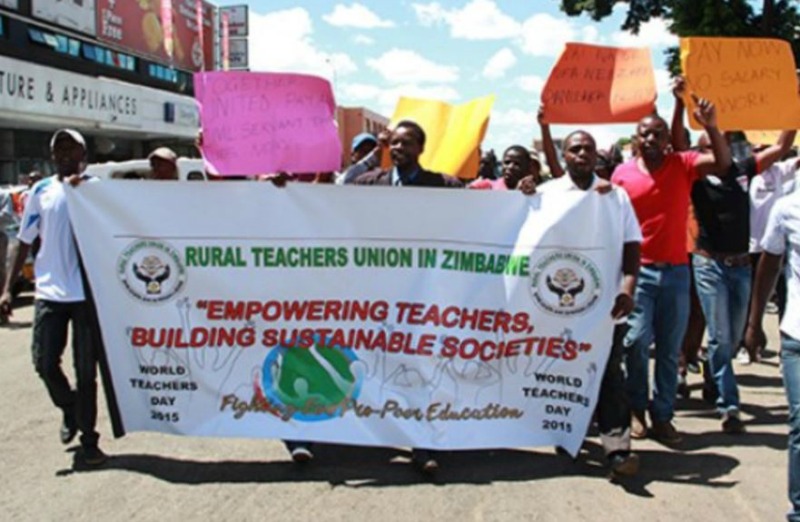 ZIMBABWE’S rural teachers are planning to go on a sensational 266km march between Mutare and Harare to press for United States dollar wages and full bonus payments by government.

This was revealed by Amalgamated Rural Teachers Union of Zimbabwe (ARTUZ) secretary general Robson Chere in a notice sent to Finance Minister Mthuli Ncube on Tuesday.

“Teachers are going to march demanding that their salaries be paid in US dollars and that their bonuses be paid in full,” Robson Chere ARTUZ secretary general said in a notice addressed to the Finance, Education as well as Public Service ministries.

“Teacher’s salaries are being paid in RTGS, contrary to the 2012 negotiated agreement that salaries would be paid in United State dollars.”

The planned march is set to start from Mutare to Harare from 10 to 19 December.

It will be an attempt by the firebrand teachers group to raise attention on the educators plight whose bond note wages are said to have shrunk to a US$75 equivalent following the recent fall of the bond note and RTGS balances compared to the more stable US dollar.

Upon arrival in Harare, Chere said, teachers will go and camp at Ncube’s offices until their demands were met.

“The teachers will camp at the Ministry of Finance and Economic Development offices until their grievances are met,” he said.

“ARTUZ reiterates that it is open for dialogue with the employer to address the living and working conditions of teachers for the betterment of the education sector in Zimbabwe.”

It will not be the first time teachers affiliated to the militant group embarked on a long journey to press for better working conditions.

In 2016, executive members of the firebrand group also went on a 10-day 200-kilometre march from Mutawatawa in Maramba-Pfungwe, Mashonaland East province, to Harare to press for almost similar demands.

They were interrogated by state security agents for engaging in what was said to be taboo in a Zanu PF stronghold.

The 15 marchers were later forced to call off the protest march citing alleged death threats from state security agents in the province.

The fresh attempts to return to the highway by the teachers group also comes at a time when junior doctors around the country have downed their tools also demanding to be paid in United States dollars.

The doctors are also demanding that they get fuel to be able to drive to and from work as the situation has nearly crippled the country.