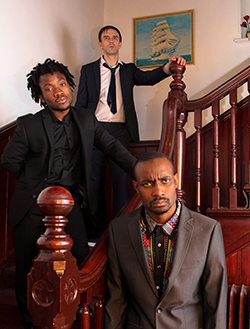 THE Rusununguko Family are from Zimbabwe, Togo, and County Clare; they are based in Limerick; their bass-led sound fuses hip-hop and world music; Nialler 9 said they “continue to impress everywhere they play”; and they are coming to Galway.
The Rusangano Family – MCs God Knows and MuRli, and DJ mynameisjOhn – play Strange Brew at the Róisín Dubh on Thursday December 8, performing songs from their albums, Rusangano/Family (2014 ) and Let The Dead Bury The Dead (2016 ).
God Knows was born in Zimbabwe and grew up in Limerick. MuRli was born in Togo before arriving in Ireland as a child. With MynameisjOhn (aka John Lillis ), they formed Rusangano Family in 2014.
Lyrically they explore what it means to be Irish, African, native, and newcomer in the modern world – refreshingly celebrating difference, rather than being puzzled by it – over hip-hop, dancehall, grime, and the indigenous musics of Togo and Zimbabwe.

The trio are a breath of fresh air for the Irish music scene. Mick Heaney in The Irish Times said: “the Rusangano Family provide an astonishing vision of a new Ireland. Just as importantly, they know how to rock the party”;
Nialler9 called them “exciting and vital. They are questioning, uncovering, showing us perspectives and experiences unknown to ourselves and at the same time, by doing what they do so well, are proposing new ways forward”.
Meanwhile The Last Mixed Tape called Let The Dead Bury The Dead “a landmark in Irish hip-hop, it’s a landmark in Irish music full-stop”.
Advertisement