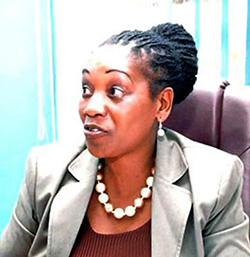 FORMER Zimbabwe Football Association (Zifa) chief executive officer Henrietta Rushwaya is demanding outstanding salaries amounting to $144,000 from the soccer mother body following her dismissal four years ago.
Rushwaya was booted out from Zifa in 2010 for her alleged involvement in the Asiagate match fixing scandal
But her lawyers- Chinyama and Partners Legal Practitioners – wrote to Zifa CEO Jonathan Mashingaidze on Wednesday demanding that their client be reinstated within 48 hours.
The lawyers also ordered the soccer controlling body to pay the salary arrears within seven days.
The letter was also copied to Fifa secretary-general Jerome Valcke.
“Our client was employed by Zifa in terms of written contract of employment for a period of four years at an initial salary of $3,000 which she genuinely expected to rise to $4,000 after a period of six months and to be constantly reviewed after each and every twelve months,” part of the letter reads.
The lawyers added: “During her tenure of employment as CEO of Zifa, she has never received any salary at all from your organisation despite the written contract of employment …
“… your organisation owes our client arrear salaries at the rate of $4,000 per month for a period of 48 months which, when calculated, translates to $144 000.”
They said the amount should be deposited in full plus interest within seven days in Rushwaya’s bank account failing which they would issue summons or refer the matter to the Labour Court.
The lawyers also demanded that her ban from all football activities be lifted as she was acquitted by a competent court of law.
Zifa have yet to respond to the demands.Advertisement