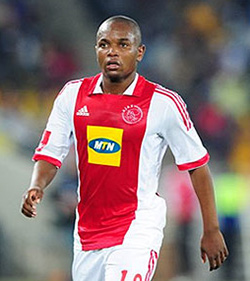 ZIMBABWE international forward Matthew Rusike has begun life with his new Portuguese Primeira Liga club CD Nacional after taking part in their first training session of pre-season on Monday.
Rusike signed a two-season contract with the Madeira club and was part of the first workout after arriving in Portugal at the weekend.
According to Nacional’s official website, Rusike joined the rest of the squad together with other new arrivals.
“The senior team was given this morning to kick off the new season with a working session held at Centennial Field and Witi was the only one absent and will only travel to Portugal during the week.
Highlighting the presence of ‘new faces’ were Mauro Cerqueira, Matthew Rusike, Nenê Bonilha and Nailson, who dressed for the first time the club’s sweater,” the reported said on their website.
“The workout lasted about an hour and a half, and although it was very demanding from a physical point of view, there was always the ball as an extra motivating factor for the players.
“In the afternoon there was another training session.”
The Primeira Liga kicks off on 16 August with CD Nacional away at Sporting Braga.
CD Nacional are the childhood club of Real Madrid star Cristiano Ronaldo.Advertisement