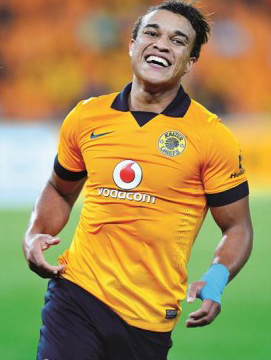 MATHEW Rusike is facing an uncertain future at South African premierships side Kaizer Chiefs as he approaches the end of his contract.
According to Goal.com, the Zimbabwe international has hardly featured for AmaKhosi this season, and the club hasn’t expressed its intention to extend his stay.
According to Edzai Kasinauyo, who claims to be representing Rusike, Chiefs have not opened talks with the striker, and he didn’t want to dwell into whether the player will eventually have his contract renewed or not.
“We have not started talking with Chiefs,” Kasinauyo told Goal. “On whether the club is interested in renewing his contract or not, I cannot comment. Maybe (I will comment) some other time, but not now,” he added.
Meanwhile, Goal has discovered that Rusike is actually represented by Miguel Paiva of Luso Africa, who could not confirm or deny reports of his client’s possible exit at AmaKhosi.
“Edzai doesn’t represent the player. I’m sure he (Rusike) will tell you that I have been representing him for over a year now,” said Paiva after seeing the story on Goal website.
On whether Rusike is on his way out of Chiefs or not Paiva said, “For now no comment on my client’s future.”
The 24-year-old striker joined Chiefs from Jomo Cosmos in 2012, but he has struggled to command a regular place in Stuart Baxter’s side.
Rusike has only managed nine minutes of game time – against Moroka Swallows – this season, and AmaKhosi are unlikely to keep beyond June 2015.
Chiefs are reportedly in the market for strikers ahead of the start of the Caf Champions League next year, with Knowledge Musona heavily linked with a move back to Naturena in January.
Chippa United’s David Zulu is reportedly on his way to Chiefs, while the Soweto giants still have Katlego Mphela and Siphelele Mthembu registered with them this season.