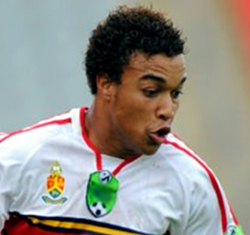 KAIZER Chiefs and Warriors striker Matthew Rusike is out of next week’s Caf Champions League match against Raja Casablanca due to suspension.
Rusike picked up two yellow cards in the games against Botswana side Township Rollers, effectively ruling him out of the next match.
The 24-year-old, who scored in the first leg of the tie and grabbed an assist in the second round, was booked once in each encounter as the Glamour Boys came out 3-1 winners in the CAF Champions League, meaning that he now faces a one-game suspension.
Rusike’s booking means that he will be forced to miss the home leg of Chiefs’ clash with the Moroccan giants.
The first leg of the respective ties will take place on the weekend of 13-15 of March, while the second will be played the following month between 3-5 April.
Perhaps Rusike’s absence could aid another Zimbabwe, Ovidy Karuru, who has found the going tough to gain a place in Stuart Baxter’s team.
Karuru arrived from Belgium last year and signed a three year deal, but has been a perennial bench warmer as Baxter has stated he will not change his winning team, who lead the South African Absa Premiership standings by 10 points from defending champions, Mamelodi Sundowns.Advertisement