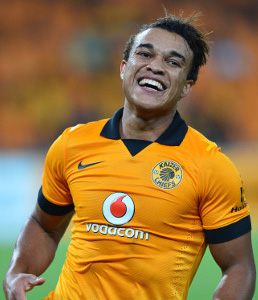 Kaizer Chiefs 4-1 Polokwane City
ZIMBABWE international Matthew Rusike struck twice as Kaizer Chiefs won the South African Absa Premiership title with a 4-1 win over Polokwane City at the FNB Stadium on Wednesday.
Rusike, whose performances have not always been appreciated by the supporters, was happy to have scored two goals as his side convincingly clinched the League title.
“It’s an amazing result today, it’s all about results and closing up the League and there are still a couple of games to go,” Rusike said.
“We’re happy with it, I’m happy with my performance but it’s a team thing you know and you can see the jubilation here [from the fans who invaded the pitch to celebrate] so thanks to all of them for coming out today.”
Kaizer Chiefs came into this clash looking to seal the Absa Premiership title, while Polokwane City needed all the points to keep their dreams of finishing in the top eight alive.
The visitors made their intentions very clear early in the game as Sipho Jembula tested Reyaad Pieterse with a fierce shot from close range, but the Amakhosi shot-stopper made a fantastic stop, parrying the shot wide for a corner.
Kostadin Papic’s side continued to play their attacking brand of football, but they were left exposed at the back, and were nearly punished when Reneilwe Letsholonyane played Matthew Rusike through in the 21st minute, only for the Zimbabwe international to be let down by his first touch, allowing Modiri Marumo to collect with ease.

However, Chiefs were not to be denied six minutes later when Willard Katsande’s perfect through ball found Lebese from inside the box, and the left-footed attacking midfielder made it 1-0 with his weaker foot.
Bernard Parker made it 2-0 in the 31st minute, capitalising from Marumo’s poor goalkeeping as Chiefs looked unstoppable in the final third.
Polokwane City struggled to create any clear-cut chances in the closing stages of the first 45 minutes.
Chiefs put their Limpopo opponents under pressure immediately after the restart, but it took them 10 minutes to get behind Polokwane City’s defence.
Siphiwe Tshabalala beat two defenders on the right hand side of City’s box, before playing a six-yard pass to Rusike, who hammered past Marumo for his side’s third of the night. Advertisement

The visitors pulled one back two minutes later through Rendani Ndou, who curled his effort past helpless Pieterse.
Rusike completed his brace in the 65th minute, as he headed past Marumo from a direct Tshabalala free-kick, much to the delight of Stuart Baxter and his technical bench.
After that the Soweto giants gave nothing away and registered their 19th win of the season in front of their own home fans.
MIDWEEK RESULTS
Tuesday: Free State Stars 1-0 Ajax Cape Town
Wednesday: Mamelodi Sundowns 1-1 Platinum Stars, Kaizer Chiefs 4-1 Polokwane City