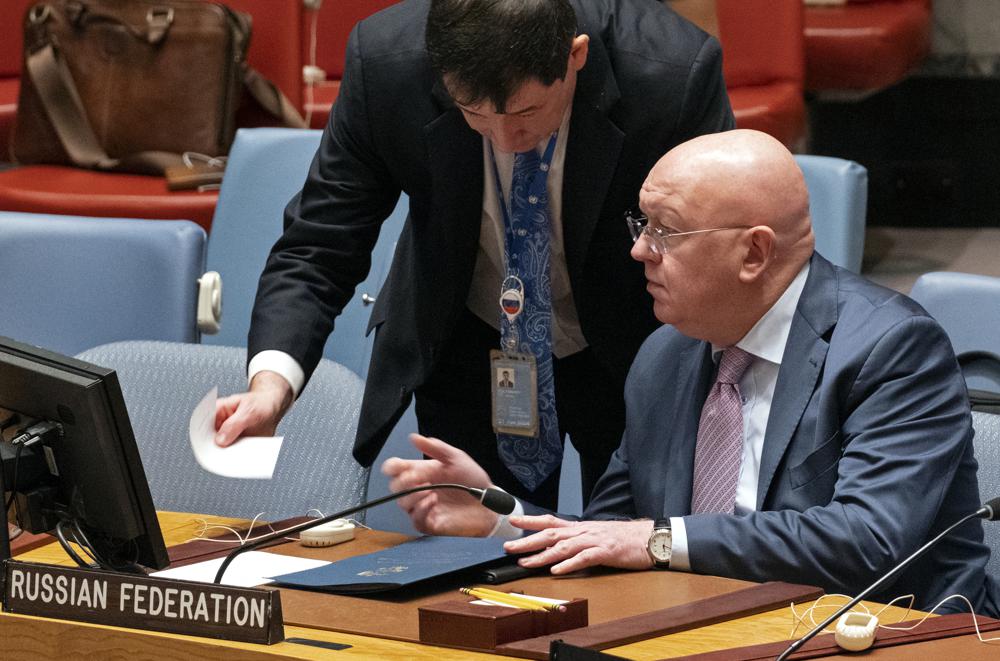 UNITED NATIONS: The U.N. Security Council on Wednesday overwhelmingly rejected Russia’s attempt to establish a commission to investigate its unfounded claims that Ukraine and the United States are carrying out “military biological” activities that violate the convention prohibiting the use of biological weapons.

Russia only got support from China in the vote on its resolution, with the U.S., Britain and France voting “no” and the 10 other council nations abstaining. The resolution was not approved because it failed to get the minimum nine “yes” votes required for adoption.

The 2-3-10 vote reflected the council’s continuing opposition and skepticism about Russia’s actions since its Feb. 24 invasion of Ukraine. The council has been paralyzed from taking any action against Russia’s military offensive because of Russia’s veto power.

Russia circulated the draft resolution and a 310-page document to council members last week alleging that military biological activity is taking place at biological laboratories in Ukraine with support from the U.S. Defence Department.

Russia’s deputy ambassador Dmitry Polyansky said after the vote that his government was “extremely disappointed” that the council did not respond positively to its request to establish a commission. Its proposed resolution called for the Security Council’s 15 members to carry out the investigation of Russia’s complaint, as allowed under Article VI of the biological weapons convention, and present a report with recommendations to the council by Nov. 30.

Polyansky claimed “Western countries demonstrated in every way that the law does not apply to them” and “are ready to trample any norm, to flout any rule,” accusing them of a “colonial mentality.”

U.S. Ambassador Linda Thomas-Greenfield countered that the United States voted against the resolution “because it is based on disinformation, dishonesty, bad faith, and a total lack of respect for this body.”

Before the vote, Russia’s Polyansky called the resolution “a considerable milestone” that would show whether the Security Council was prepared to act in line with international law giving state parties to the biological weapons convention the right to seek an investigation at the Security Council.

“It is a milestone for Russia’s deception and lies,” Thomas-Greenfield shot back. “And the world sees it.”

At a meeting in September of the 197 state parties to the biological weapons convention, she said, “Russia failed to provide any credible evidence to support these false allegations” and an overwhelming number of countries that spoke “considered that the issues raised by Russia were unsubstantiated and had been conclusively addressed.”

But Thomas-Greenfield said that wasn’t enough for Russia and “it inappropriately raised the same false claims here, abusing its position and abusing us.”

Mexico’s deputy ambassador Juan Manuel Gomez Robledo, whose country abstained, said Russia didn’t provide evidence to activate an investigation. He said it was not “realistic” to set up a commission to report in 28 days — and a commission could not be independent and objective if Russia as a council member was included so it would have to be excluded “since it is one of the parties involved in the armed conflict.”

Russia’s initial allegation of secret American biological warfare labs in Ukraine in March has been disputed by independent scientists, Ukrainian leaders and officials at the White House and Pentagon. An Associated Press investigation in March found the claim was taking root online, uniting COVID-19 conspiracy theorists, QAnon adherents and some supporters of former President Donald Trump.

Ukraine does have a network of biological labs that have gotten funding and research support from the U.S. They are owned and operated by Ukraine and are part of an initiative called the Biological Threat Reduction Program that aims to reduce the likelihood of deadly outbreaks, whether natural or manmade. The U.S. efforts date back to work in the 1990s to dismantle the former Soviet Union’s program for weapons of mass destruction.

Russia called a Security Council meeting on its claims last Thursday, which the United States and its Western allies vehemently dismissed.

Thomas-Greenfield, the U.S. ambassador, called the meeting “a colossal waste of time” and said the claims are part of a Moscow “disinformation campaign” that is attempting “to distract from the atrocities Russian forces are carrying out in Ukraine and a desperate tactic to justify an unjustifiable war.”

Russia’s U.N. Ambassador Vassily Nebenzia accused the U.S. of conducting work in Ukraine with deadly pathogens — including cholera, plague, anthrax and influenza — that couldn’t be justified under the guise of public health. He said documents and evidence recovered by Russian authorities suggested a military application.