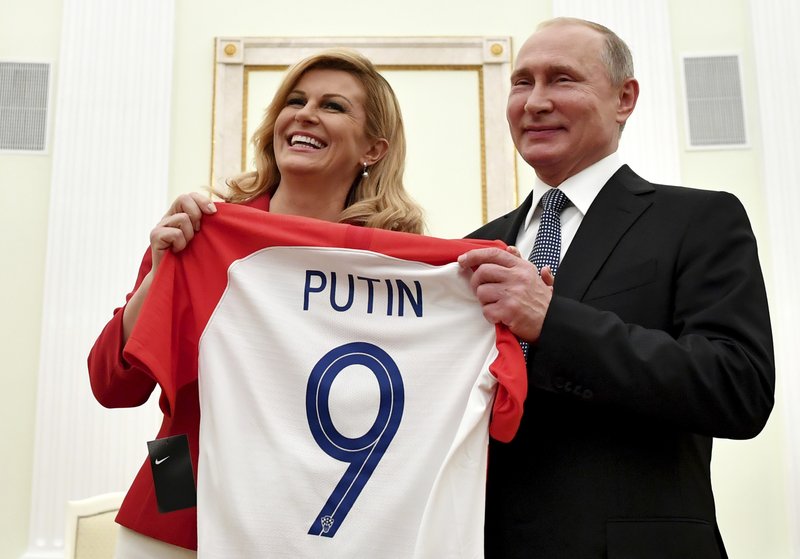 MOSCOW: Despite a national wave of elation from the World Cup that bathed Russia in a rosy light, President Vladimir Putin will face some challenges in extending the post-soccer glow at home and abroad.

Well-organized, festive and friendly, the World Cup has shown off a welcoming and modern Russia in sharp contrast to common biases abroad that cast the country as dour, devious and a bit backward.

Putin is likely to try to leverage that Monday when he holds a summit in Finland with U.S. President Donald Trump, and there have been strong signs the American side will be receptive. When national security adviser John Bolton was in Moscow last month to arrange the summit, he told Putin he looked forward to “learning how you’ve handled the World Cup so successfully.”

Just minutes after the World Cup final ended with France defeating Croatia, Trump tweeted “congratulations to President Putin and Russia for putting on a truly great World Cup Tournament — one of the best ever!”

That admiration may not extend far enough to affect the larger questions at issue in the summit, including Russia’s annexation of Crimea and involvement in a separatist conflict in Ukraine, allegations that Russia flagrantly meddled in the 2016 U.S. presidential election and Trump’s withdrawal from the Iran nuclear agreement, among other troubles.

The summit’s prospects were further clouded Friday by the U.S. indictment of 12 alleged Russian military intelligence agents for sophisticated hacking in the 2016 election.

“There is some marginal benefit for Putin to having played host to a successful sporting competition that had a largely positive and apolitical tone … (but) this does not give Putin any special advantage going into Monday’s summit meeting,” said Matthew Rojansky, a Russia analyst at the Woodrow Wilson International Center for Scholars.

Putin kept a relatively low profile for the tournament, attending only Russia’s opener against Saudi Arabia and Sunday’s final at the Luzhniki Stadium in Moscow, even skipping the home team’s win over Spain in the knockout stage at the same venue.

Putin has seen his ratings fall significantly since the June 15 start of the World Cup. The state-run polling agency Foundation for Public Opinion found that the percentage of Russians who express moderate or strong distrust of Putin rose from 20 percent in the week before the tournament started to 32 percent last week.

The startling rise appears to come as the government pushes a proposal to raise the eligibility age for state pensions from 60 to 65 for men and from 55 to 63 for women. The proposal was sent to the parliament the day before the World Cup opened in what many believed was a gambit to minimize public dismay.

But “the World Cup wasn’t able to deflect the population from the pension reform,” the business newspaper Vedomosti wrote pointedly. The Kremlin is worried that the issue could seriously reduce support for pro-government candidates in regional elections this fall, the newspaper reported.

Politics aside, the tournament has been a huge boost for the self-esteem of Russians. State TV broadcasts have devoted substantial time to reporting how foreign fans were impressed with the locals’ friendliness and helpfulness. One broadcast even trilled about visitors’ pleasure in travelling “platskartny” — the notoriously claustrophobic, 54-bed dormitory cars on Russian passenger rail routes: “Hundreds of thousands of foreign fans have discovered the romance of Russian trains.”

Along with the unambiguous good cheer, the World Cup also benefited from what didn’t happen. There weren’t any major facility foul-ups and security was diligent but less intimidating than at the 2014 Sochi Olympics.

There were almost no protests, though four demonstrators barged onto the field during the final and were quickly hauled away. The Pussy Riot punk performance group claimed credit; it’s the same group whose members were whipped by a paramilitary group in one of the more notorious incidents at the Sochi Olympics.

Police were unusually low-key about World Cup partying that turned a central Moscow street into a nightly fest. Even Pussy Riot recognized that , with a member saying in a video about Sunday’s protest that “The World Cup has shown very well how well Russian policemen can behave. But what will happen when it ends?”

Although foreign news accounts ahead of the event warned about the dangers of Russian soccer hooligans, little trouble was reported, in part because Russia had cracked down on hooligans ahead of the tournament.

“Many stereotypes about Russia simply collapsed. People saw that Russia is a hospitable country, kindly disposed toward those who come to us,” Putin said last week.

“The important result of the championship is that we are looking at ourselves in the reflection of the delighted eyes” of foreign visitors, he wrote, adding his voice to what seems to be a consensus.

“Russians, the football fans of the world have learned, do not just drink vodka, wear fur caps with red stars and play the balalaika or lead a bear on a rope,” wrote Andrei Kolsenikov of the Carnegie Moscow Center.

But while the last four weeks of soccer and celebration have boosted Russians’ view of themselves, Kolsenikov dismissed the idea that there would be any practical effect.

“As a result of the World Cup,” he wrote, “Russians will not become more free, the police will not stay friendly, and the regime will be no less authoritarian.”