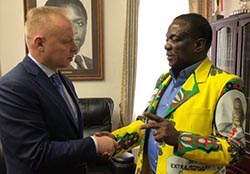 VICTORIA Falls: Visiting Russian billionaire, Dmitry Mazepin, says he is yet to decide whether to invest in the country.
Owner of Russia’s largest fertiliser manufacturer Uralchem, Mazepin visited Zimbabwe’s prime resort of Victoria Falls on Thursday.
And emerging from the rainforest, the man who is ranked as one of the 100 richest Russians at $7.7 billion net worth said: “I had come to visit Zimbabwe, and now I am in Victoria Falls.
“Of course, we are interested in doing some business in Zimbabwe and even here In Victoria Falls but it may not be now because it’s still quite difficult to say what exactly we want to do.”
He however, admitted to being charmed by the majesty of the Victoria Falls.
After touring the falls, Mazepin and his small delegation were quickly whisked away to the local airport for their return flight to Harare late afternoon.
Indications earlier were that Mazepin is interested in investing in Zimbabwe’s fertiliser industry.Advertisement