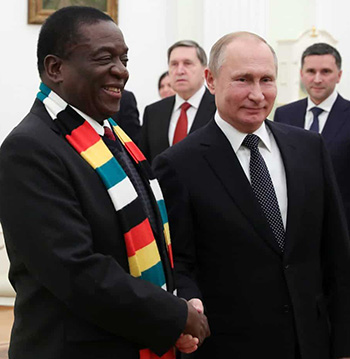 THE Russian embassy in Harare has sent its congratulations to Zimbabwe on the occasion of the national Heroes’ Day and Zimbabwe Defence Forces Day celebrations this Monday and Tuesday.

Said the embassy, “The Embassy of the Russian Federation extends the sincere congratulations to the Zimbabwean Friends on the occasion of Heroes’ Day and Zimbabwe Defence Forces Day.

“Russia has been back-to-back with Zimbabwe through support of the Liberation struggle, assistance in safeguarding the State sovereignty and development of mutually beneficial cooperation.

“The Embassy joins the gallant Sons and Daughters of Zimbabwe and commemorate shaking off oppression, maintaining independence and ensuring security of this blessed Land.

“By honouring the Heroes and their Deeds we pay respect to those who sacrificed their lives for the great cause of African Liberation.”

The warm message is a breath of fresh air for the under-fire Zanu PF led administration which has been under intense criticism in the recent past for alleged rights abuses.

The US government and its western allies have increased their pressure on Harare to cease a targeted crackdown on opponents of President Emmerson Mnangagwa’s Zanu PF and government critics.

This has forced authorities to go into overdrive to defend the under-siege government as international friends become fewer.

Russia is a long time ally to Zimbabwe, having supported the country’s liberation struggle through arms and military training.