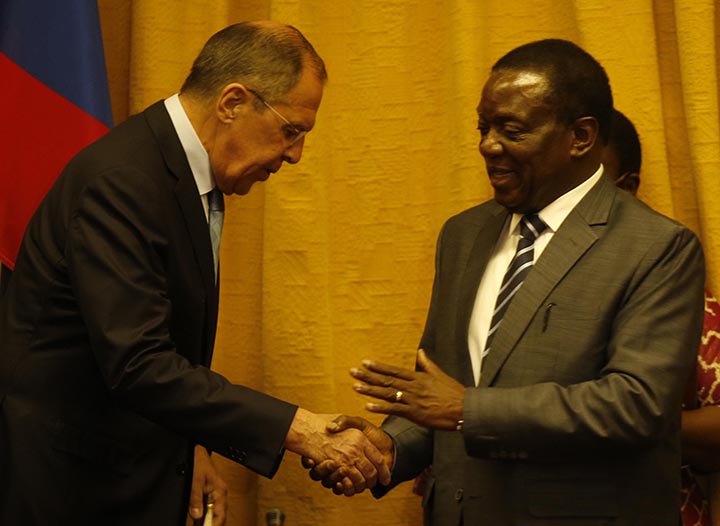 The message was conveyed to Mnangagwa by Putin’s foreign affairs minister Sergey Lavrov in Harare on Thursday.

Moscow, like much of the international community, did not condemn the military intervention which facilitated Mnangagwa’s rise to power last November.

Meeting the Zimbabwean leader on Thursday, Lavron said the Kremlin was looking to deepen ties with the new authorities in Harare.

“The message from President Putin is to say Russia is willing to support the President of Zimbabwe in his efforts to stabilize the internal political situation in the country and consolidating the society,” said Lavrov.

“We will also provide Zimbabwe with military and technical assistance.”

He however insisted that Moscow was not interfering in Zimbabwe’s internal politics.

“We never meddle in the domestic affairs of any country even though we continue to hear accusations from different capitals regarding the issue.

“We do not share this philosophy (of interference) and believe this is neo-imperialistic,” said Lavrov pointing an accusing finger at the US who he said had been outed by its own media for interfering under the guise of supporting democratic change.

“It is up to the people of Zimbabwe as well as all other countries to determine their future. We hope the people of will express their will during the elections.”

Meanwhile, western countries which have demanded free and fair elections before fully re-engaging Mnangagwa’s government, Lavrov said Moscow would not place any preconditions on investment and trade deals.

“We do not understand why we should impose any conditions on anyone. We are willing to cooperate on the basis of equality.

“We believe that these politicised steps to impose such things as sanctions interfere with free market forces and distort them illegally,” he said.

“The visit by Minister Lavrov has escalated the level of relations between the two countries to combine both political and economic relations.”

Special advisor to President Mnangagwa, Christopher Mutsvangwa said African should celebrate the new scramble on the continent as reports emerged that US Secretary of State Rex Tillerson was also on a whirlwind tour of the continent.

“We are only excited when major powers visit Africa. It’s good for Africa, we have a young population and we need capital to modernise our economies.

“It is up to us and we are competent enough to determine who our partners should be,” said Mutsvangwa.