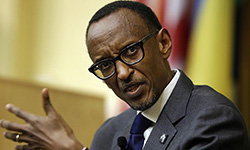 I HAVE always believed that dictators are not born, but made over a long period of time.
There is no doubt that Paul Kagame has achieved enormous success as a leader and that he belongs on the right side of Rwandan history, at least for now. He has played a big role in rebuilding Rwanda from the aftermath of the genocide and has laid the ground for unity, peace, socio-economic development and political stability.
Under Kagame’s rule, Rwanda boasts of a robust agricultural sector; a magnificent public health system; a stable and growing economy; significant strides have been made in the education system and women empowerment; a favourable investment climate and above all, a generally peaceful nation. There is no doubt that Rwanda is a better place now than it was before Kagame took over.
Kagame’s second term is due to come to an end in 2017 and he initiated a controversial referendum which overwhelmingly gave him a chance to lead until 2034. This is where the gist of this article is centered.
From the outset I will clearly state that it is entirely up to the people of Rwanda to decide who they want as their leader. I will also state that my belief in the sanctity of presidential term limits is not based on Western ideas of African politics, but by my own observations and experiences as an African.
I believe that if a country’s constitution limits presidential terms then that should be sanctified and respected regardless of the President’s achievements. Once the limits are tempered with, dictators will hind behind ‘the-people-still-want-me’ allegory to service their self centred and insatiable quest for power.
History has shown us that the moment a leader seeks an extended mandate, that is a recipe for disaster. Every time leaders amend constitutions, it is for their own selfish pursuit for absolute power rather than ‘honouring a call from the people’ as they want us to believe.
I believe that Rwanda has made a big mistake by giving Kagame a chance to extend his rule. I believe that he should not be allowed to continue in power beyond 2017 for one reason; power corrupts. Absolute power turns good men into despots, it makes good leaders go out of touch with reality, and it makes good leaders lose their connection with the people.
In order for the Rwandese to build on the gains of Kagame’s leadership, they need a new leader post-2017 otherwise they will live to regret it. To bring this issue closer to home, let us not forget that Robert Mugabe was once a true darling of the people. He once had a wonderful vision for the country but as he stayed too long in power, the love for the country turned into the love for power and his vision for the country became a vision for himself.Advertisement

Mugabe got out of touch with reality to the extent of thinking that Zimbabwe is his personal property. If we had gotten rid of Mugabe in the ‘90s, we would be among the most prosperous countries in Africa. Our mistake was allowing one individual to amass absolute power over a very long period of time. Now Mugabe does not believe anyone is capable of leading as long as he lives.
Rwanda risks going the same route. In fact, Rwanda is traveling on the same trajectory as Zimbabwe and the similarities in the turn of events are quite telling. Talk of ethnic conflict, significant socio-economic development, a good education system then due to the love for power, a good leader turning into a dictator and believing he should be president for life. At this rate the slogan in Rwanda in 2030 will be “Munhu wese kuna Dr. Amai Jeannette Kagame”.
Kagame has effectively been in power since 1994 although he has officially been President since 2000. He has been in power for long enough to achieve his vision and by extending his rule beyond constitutional limits, he proves that he has love for absolute power. The love for power is the root of any country’s destruction. There is bloodshed in Burundi as Pierre Nkurunziza tells us that the ‘people’ want him to continue in power after he manipulated the process of popular democracy. The love for power is the root of any country’s destruction.
I actually see another Mugabe in Kagame and I firmly believe he should not be allowed to extend his reign beyond 2017. It is for people like Kagame and Mugabe that I believe in the sanctity of presidential term limits. Just like Mugabe, Kagame is afraid of and is loathe of any opposition. Kagame does not want his power to be threatened in any way.
Just like Mugabe, Kagame has enacted several controversial laws to ensure that he consolidates his power. Just like Mugabe, Kagame is repressive, oppressive and he has actually morphed into a dictator over a long period of time. Many people will remember how he prevented Victoire Ingabire from running for the presidential elections in 2010 under controversial circumstances while allowing his stooges who pretended to ‘opposition’ candidates.
Many will remember how Gen. Faustin Nyamwasa survived an assassination attempt in Johannesburg, an act strongly attributed to Kagame. Many will also remember the 2014 killing of Patrick Karegeya in a Sandton hotel. This mirrors the killings of several opposition members in Zimbabwe since independence. Just like in Zimbabwe, many Rwandan opposition figures, journalists and others deemed critical of Kagame’s rule-by-fist and intolerance of the opposition have either disappeared or have been summarily executed.
Evidence of Kagame’s alleged involvement in the executions and disappearances has been presented. Kagame is as ruthless as he was when he was still a rebel. Just like Mugabe, Kagame has also made sure that he surrounds himself with bootlickers and lapdogs who sing his praises and he uses the carrot and stick tactic to tame them. In fact, on all accounts Kagame is a tyrant and he has consolidated his power through his iron fist approach and gross human rights violations.
It is against this background that I feel the Rwandese made a great mistake by giving Kagame an opportunity to extend his rule. I have always believed that dictators are not born, but made. In Zimbabwe we made our own dictator under similar circumstances as the Rwandese are making theirs.
In Zimbabwe we learnt the hard way and so will the Rwandese, in the long run. However, at the end of the day it is up to the people of Rwanda to decide their destiny and the results of the referendum, though controversial, should be respected. As a proud African, I believe I have a duty to share my own experiences with fellow Africans for the good of the motherland.
Katungu is an independent political thinker who writes in his personal capacity. You can follow him on twitter @wizziekat for interactive discussions