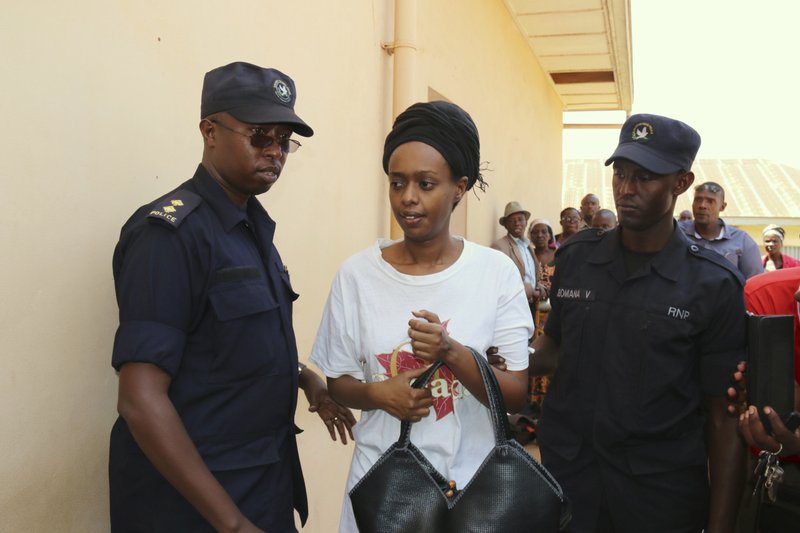 KIGALI: As she waits for a judge to pronounce her fate, the Rwandan opposition leader accused of inciting insurrection and forgery after challenging the longtime president in last year’s election says no amount of pressure will silence her.

Speaking to The Associated Press ahead of her court appearance on Thursday, Diane Rwigara remained defiant as she faces 22 years in prison if convicted.

The 37-year-old, a fierce critic of the ruling party, is Rwanda’s highest-profile opposition figure and the rare person to openly criticize the government from inside the country.

Her case has drawn global attention as President Paul Kagame again faces pressure to give more space to critics in the highly controlled East African nation.

“We just have to wait and see,” Rwigara told AP in a telephone interview, calling Rwanda’s court system unpredictable and lacking independence. “I hope to be cleared of all these made-up charges but I am ready for any outcome.”

No matter what, she said, she will continue to raise issues of alleged human rights violations in the country. Kagame is praised for leading Rwanda’s recovery from the 1994 genocide and has won praise for its advances in economic development and women’s rights, but critics say he does not tolerate criticism. His government rejects such accusations.

Rwigara last year acknowledged the risks of running against Kagame, one of Africa’s longest-serving leaders. Soon after she announced her intention to run, nude photos purportedly of her that she said had been manipulated were published on social media in what her supporters called an effort to undermine her credibility.

Rwigara later was disqualified from running, with the government saying she lacked enough supporting signatures and had forged some of them. Kagame won a third term with more than 98 percent of the vote.

During her trial, Rwigara has denounced the charges against her as politically motivated. Her 59-year-old mother, Adeline, faces charges of inciting insurrection and promoting sectarianism. Both have denied the charges.

“Denying somebody rights and freedoms on baseless charges is a bad experience,” Diane Rwigara, who has been out on bail since October, said of her stay behind bars. She said her mother got sick while in jail. “Though my mother is fine today, the prison is not a place for such aged mothers who never committed any crimes.”

Rwigara said her journey since challenging Kagame has not been easy. She encouraged youth across Africa to stand up and rescue the continent from old generations who cling to power and fail to answer to the people they lead.

“Nobody else will come to ‘liberate’ us,” she said. “It’s us the youth to do it ourselves.”

In recent days Rwigara has received support from some U.S. senators and human rights groups that called on Rwandan government to drop the charges against her. Sen. Dick Durbin said in a Twitter post last week that he is “troubled by what appears to be highly questionable charges against Rwigara for seemingly running for office peacefully.”

Responding to the senators on Sunday, Rwanda’s Minister of Justice Johnson Busingye told reporters in the capital, Kigali, that courts should not be pressured by third parties.