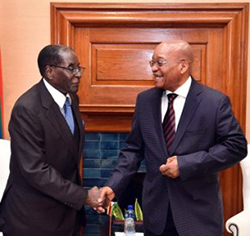 SOUTH African and Zimbabwean business leaders kicked off a forum on Thursday to explore opportunities for further cooperation.
The forum provided an opportunity for business people from both countries to exchange views on how South Africa and Zimbabwe can work together to advance economic cooperation for mutual benefit, South African President Jacob Zuma said at the opening of the forum.
“We are meeting to cement these trade relations and to explore new opportunities in the two countries.”
Opportunities for deeper economic cooperation exist in the fields of mining, water, energy, infrastructure development, transport, information and communication technology among others, Zuma said.
“The existing trade relations and potential for further cooperation amplify the need for regional integration to be at the top of our economic agenda.”
The forum was on the side-lines of Zimbabwe’s President Robert Mugabe’s two-day state visit to South Africa.
Zuma and Mugabe on Wednesday witnessed the signing of agreements which include the one establishing a Binational Commission to be chaired by the two heads of state.
“We will meet annually from now onwards to ensure that relations at all levels are advanced for the benefit of our people,” Zuma told delegates at the forum.
“There are many similarities between our countries’ paths to economic prosperity.”
Consistent with the strong historical economic relations, a number of South African companies continue to operate in Zimbabwe, principally in the mining, tourism, agriculture, banking and retail sectors.
Foreign Direct Investment (FDI) by South African entities in Zimbabwe between 2003 and 2013 amounted to approximately US$1.1 billion US dollars, creating over 2,485 employment opportunities, according to Zuma.
“Historically, our two countries trade more with each other than with any other country on the continent,” Zuma said.
Between 2005 and 2014 South Africa’s exports to Zimbabwe grew by 247 percent to about US$601 million dollars from US$210 million dollars, with minimal contraction recorded in 2006 and 2009.
In the same period, Zimbabwean exports to South Africa fell by 54.7 percent to US$169 million from about US$372 million dollars that was reported in 2005.
South Africa’s exports to Zimbabwe comprise machinery, electrical equipment, mechanical appliances, chemical products, base metals, mineral products and agro-processed products.Advertisement

In turn, Zimbabwe’s exports to South Africa include textiles, pearls, precious and semi-precious stones as well as base metals and mineral products.