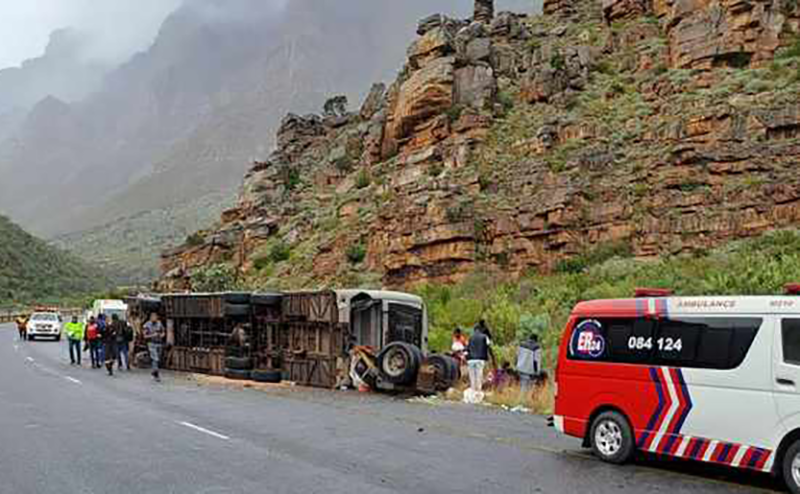 CAPE TOWN: Western Cape police are investigating a case of reckless and negligent driving following an accident on the N1 between Paarl and Rawsonville on Saturday morning.

According to police spokesperson Sergeant Wesley Twigg, a bus carrying Zimbabwean nationals overturned on the highway at about 8am on Saturday.

Twigg said the bus was en route to Cape Town when the incident occurred.

“The injured passengers were taken to nearby hospitals for treatment,” he said.

The Western Cape MEC of mobility, Daylin Mitchell, who visited the scene shortly after the crash, said about 38 people had been injured.

“While I’m relieved that there were no fatalities, I wish to remind public transport operators of the big responsibility they have by transporting human life.

“Public transport will remain a priority to me in the lead-up and over the festive season and I am issuing a stern warning to all operators – we will have a zero tolerance approach to compliance,” said Mitchell.

Ineke van Huyssteen, spokesperson for ER24, said when their paramedics arrived at the scene, they found the bus lying on its side partially in the yellow lane.

“A triage area was set up while medics tended to the patients.

“Fortunately, no fatal injuries were found on scene.”

Van Huyssteen said the bus was travelling in the direction of Paarl.

“The exact circumstances surrounding the incident are not known to our paramedics.” she added.

The left lane in the direction of the Huguenot tunnel has been closed to traffic while officials attended to the scene.

The spokesperson for the Department of Transport and Public Works, Jandré Bakker, said 26 patients had been taken to Worcester Hospital, while the other 12 were taken to Paarl Hospital for medical treatment.