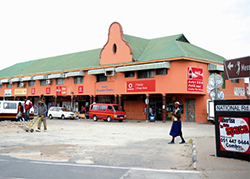 THE economy of Musina in Limpopo is feeling the pressure after the xenophobic attacks.
Business activity in the town near the border with Zimbabwe is largely dependent on visitors from the other side of the Limpopo River.
The effects of the sluggish business activity are immediately felt from the Beit Bridge border gate on the South African side.
Taxi operators who make profits transporting Zimbabweans between the border and Musina are feeling the pinch.
Moses Thoka, 24, who operates a metered cab, said few Zimbabweans had crossed into South Africa since the attacks.
Most of his customers made a one-day trip between the two countries. “They usually come here to buy groceries, furniture and clothes,” he said.
The few who still came to South Africa no longer felt safe.
“Usually I make about R1 800 a day, but since these attacks started, I hardly make more than R700,” Thoka said.
Food vendors near the taxi rank have also been affected.
“Since this morning I only served four plates. My income so far is about R100,” said Eslina Shumba, who sells sadza and meat.
Shumba, from Masvingo in Zimbabwe, is employed by a South African businesswoman who owns the stall where she cooks. Back home she has three children and two parents to support.
“We are foreigners in this country, what (else) can we do? We have to be strong,” she said.
At the China Mall in Musina, many shops were closed Tuesday. For those that were open, business was slow.
Melody Mafuru, a Zimbabwean who works in a Chinese shop, said the attacks had kept customers away, many of whom were fellow Zimbabweans.
“Today not one person came to buy in our shop,” she said.
The mall had been closed at the weekend “because there were fears that there could be attacks this side”, Mafuru said.
After the attacks on foreigners in KwaZulu-Natal last week, and then in Gauteng, few foreigners were seen on the streets. Those who were brave enough to cross into South Africa spoke of fear and resentment back home.
Zimbabwean Rob March, who arrived in South Africa on Sunday, said: “We are thinking of retaliating if these attacks don’t stop.
“Do you think we are not aware of South Africans who are in Zimbabwe?”
A Musina local, Ozzy Pesula, 24, there was no anti-foreigner sentiment in the town.Advertisement

“We have been living with them for a long time. They are important for the economy of Musina, and we don’t view them as foreigners,” he said.