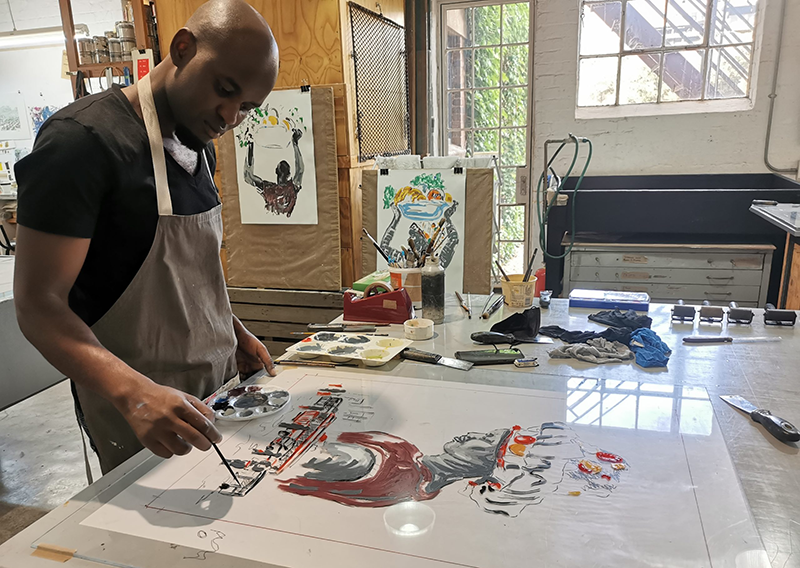 SOUTH AFRICA: Visual artist Mandlenkosi Mavengere’s use of banknotes, overloaded buses and hawkers selling on the streets to make a living as background for his portraits paints a gloomy picture about life in his home country Zimbabwe.

The pieces are part of his current exhibition called Forces of Ambition that is on at David Krut Gallery in Maboneng, Johannesburg.

Now based in Johannesburg, the multidimensional visual artist relates the story of hardship in Zimbabwe, pushing his patriots to migrate to SA for survival.

Through his colourful pieces, he brings out a conversation and discussion on issues of migration and labour relations in contemporary society.

The subject started with him being keen on expressing his experience as an immigrant.

Later Mavengere realised that he needed to also depict other people’s experiences in his art work. 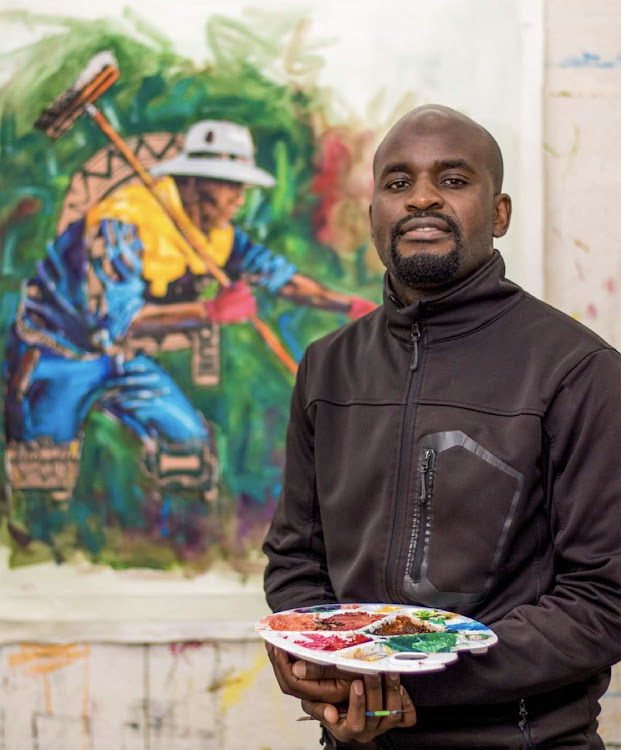 An accomplished printmaker, he predominately uses linocut banknotes in his artworks.

The banknote artworks are a framework within which one can observe the issues of migration with relevance to socio-economic divergence of identity and convergence of another.

Born in 1992 in Bulawayo, his works strike you from a distance with a visible Zimbabwean heritage and identity features.

He portrays people as they leave their familiar homes and territories, searching for better life in the cities and foreign countries like SA and Botswana.

“When I emigrated from Zimbabwe to SA I decided to embrace my experience. It started as a personal story.  Looking at the inflation that we experience in Zimbabwe those paintings about notes were a good way to express it. My work depicts a lot of money issues, hunger, cross border issues and documentation challenges,” he says.

“When I emigrated from Zimbabwe to SA I decided to embrace my experience. It started as a personal story.  Looking at the inflation that we experience in Zimbabwe those paintings about notes were a good way to express it. My work depicts a lot of money issues, hunger, cross border issues and documentation challenges,” he says. 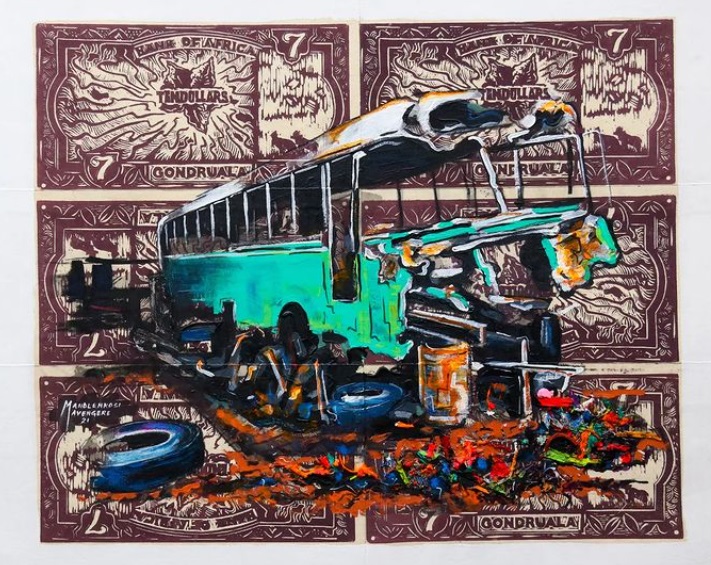 “Directional lines in the banknotes depict scattering of people and population displacement, the repetition of patterns which symbolise circumstantial economic system. The figures and portraits are economically fabricated identities that are fitting into a new homeland of occupation versus the home of origin.”

Mavengere is able to tackle complicated subject matters using monotype print,  enhancing it with the richness of colour palette and completing everything with a sense of buzzing energy and vibrancy.

The multitalented artist seems to enjoy painting 25 billion banknotes, which speaks to the demise of the economy of Zimbabwe as the hyperinflation triggered mass emigration.

It also represents the hope and potential of the continent of Africa, while the banknotes reveal stories of both success and great loss.

In explaining the 25 billion banknotes, he says: “I try not to suggest what is normal. The 25 billion note is authentic to the idea at the time and it speaks to my observation and growth as an artist. I create these banknotes to emphasise the state of economy.”

Mavengere, whose works is predominantly a combination of printing and painting, moved to SA after completing high school.

It was in SA where he took up art as a career.

After studying art, he joined one of the country’s talented artists, William Kentridge, as an intern in his Studio in 2017.

Kentridge meaningfully developed his innovation, storytelling skills, and further exploration of the theme of migration.

The artist’s works have since been featured in various prestigious local and international exhibitions, including locations such as France, Belgium, and Germany.