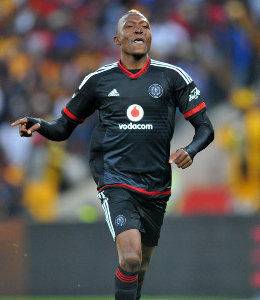 TENDAI Ndoro spent hours honing his early skills playing street football in Bulawayo with twin brother Takudzwa, now a goalkeeper for South Africa’s Witbank Spurs in the First Division.
Those skills are threatening to turn the Zimbabwean into the first foreign striker since Dennis Lota in the late 1990s who Orlando Pirates can rely on for goals.
“On the streets is where we developed that passion for football. My brother and I would play for hours and days without stopping,” Ndoro said.
Pirates are pushing to end a trying season with a top-four place in the PSL and the Nedbank Cup trophy, and Ndoro’s four goals in five games have lifted the finishing-shy Buccaneers.
It was a tough start for Ndoro signing from Mpumalanga Black Aces at the beginning of this season. In a handful of substitute appearances, he missed easy chances.
The striker has bulked up in the gym under the guidance of Pirates fitness trainer Warren Engelbrecht.
Dynamic running and strong shooting have given a hint that Ndoro could emerge to be as successful a striker as countryman Knowledge Musona was at Soweto rivals Kaizer Chiefs a few seasons ago.
“I joined Pirates when there were no spaces left in their CAF Confederation Cup squad,” Ndoro said.
“It’s difficult as a striker at a new club, where you’re adjusting to the style, playing for 10 or 15 minutes a game. Strikers need playing time and confidence.”
Bucs coach Eric Tinkler said Ndoro had to up his work rate.
“I’m not that kind of a striker who’s going to be busy chasing around defenders. I want defenders chasing me,” the Zimbabwean said.
“But my timing of runs and positioning have improved. At Aces we played long ball. Pirates play football.”
Ndoro has come from humble beginnings to join southern African football royalty.
“My brother and I left for Botswana in 2009 for a better life from a difficult situation at home. In Zimbabwe there are problems. Your parents’ salaries don’t come some months,” Ndoro said.
Chicken Inn placed their order to bring the striker back to Bulawayo where Ndoro was the Zimbabwe Premier League’s top scorer in 2013 with 21 goals.
He was spotted by Aces scout Jacob Sakala playing in the Cosafa Cup for Zimbabwe in Zambia in 2013.
“Sakala said, my man, there are no trials for you. Let’s just go immediately to South Africa and sign a contract.”Advertisement

It was on a Sunday afternoon a month ago in Mbombela that Ndoro’s Bucs career took off, scoring a brace against old club Aces in a 3-1 win.
Bucs have also not looked back. They won three more league and cup matches after that in their best spell of the season to break into the PSL top six, beating Chiefs in the first round of the Nedbank Cup along the way.
“We’re finishing on a high and want to get something in the cabinet to make the effort this season worthwhile,” Ndoro said.