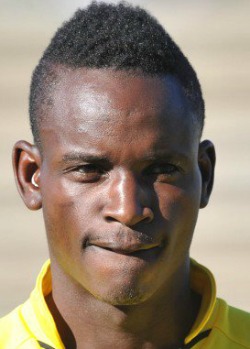 NEWS reaching the Siya crew is that Zimbabwean defender, Ronald Pfumbidzai, has attracted interest from the big SA PSL clubs.
The left-back is currently on the books of Zimbabwean giants, CAPS United.
Sources in Zimbabwe have confirmed to the Siya crew that the 22-year-old has been closely monitored by the ‘Big Three’ of Kaizer Chiefs, Mamelodi Sundowns and Orlando Pirates for the impressive performances he has been producing for CAPS consistently.
At the beginning of 2015, it was reported by the Siya crew that Pfumbidzai attended a trial with Chiefs, under Stuart Baxter when the Englishman was still the head coach at the Naturena outfit.
The player later signed a contract with Danish side, Hobro IK, later that year, although he parted ways with them just six months into the deal, following an alleged fall-out with countryman Quincy Antipas.
“Ronald Pfumbidzai is wanted by clubs in Mzansi. The ‘Big Three’ are interested in him. There is a chance that he could end up playing in the PSL next season. Watch the space,” said the source.  Advertisement