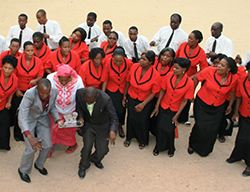 CHORAL group, Chitungwiza Harmony Singers (CHS), came 3rd Overall at this year 38th Old Mutual National Choir competition recently held at the University of Freetown in Bloemfontein South Africa.
The choir walked away with R54 000 and a trophy, having already pocketed on R11,000 from the elimination stages of the competition which was held over the 12-13 December weekend.
The 60-member group sang one western piece Light as Air at Early Morning, a 16th century song dressed in outfits of that era.
They also performed one African song Wase WaMuhle Mzanzi which tells a story about the beauty of South Africa and their own choice, Pfumvu, which talks about the tribulations Zimbabweans are going through.
Simon Alumin Choir from the Western Cape Province came 1st and walked away with R74,000 and 2nd position went to Prince Mshiyeni Choir from KwaZulu-Natal Province, taking home R64,000.
On the road to the finals, Chitungwiza Harmony Singers (CHS), the four-time National Merit (NAMA) award winners won the South African Old Mutual Regional choral competition for the fifth time in August this year under the directorship of Arnold Dzangare.
In an interview with NewZimbabwe.com after the announcement of the results, CHS choir manager, Sheilla Kahuni, said this was an early Christmas present to the country.
“Exited; this is the reward of hardworking by the choir and a present to 2015 Christmas present for Zimbabwe as a country.
“I can’t even describe the mood of the choir members they are over the moon,” she said.
The choir has also been invited to the Tenth International Choral Festival in July 2016 Missoula, Montana USA.
CHS, a brainchild of founder the late Israel Dzangare, can sing in Shona, Xhosa, Zulu Germany and French among other languages.
The Old Mutual music development venture is an annual event that runs from January with regional championships culminating in the national finals in December with financial backing from the company since 1988.
It is considered the biggest and the best choir festival in the SADC region.Advertisement