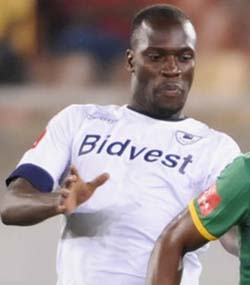 SOUTH Africa: Ten-man Maritzburg United held Bidvest Wits to a 1-1 draw in a PSL clash at the Harry Gwala Stadium on Tuesday evening
The result extends the Team of Choice’ unbeaten in the Premier Soccer League to five matches with the KwaZulu-Natal club right to celebrate the point as a win; having played the entire second-half with 10-men.
Despite the disappointing outcome for the visitors, the Clever Boys climbed back to the top of the standings with Cape Town City and SuperSport United in league action on Wednesday evening.
Bidvest Wits had a chance to test the Maritzburg goalkeeper in the eighth minute following a cynical foul by Bandile Shandu. Mogakolodi Ngele lined it up, but he could only succeed in rattling his resulting attempt into the wall – to the frustration of Gavin Hunt and his technical team.
Bongani Khumalo had to be alert to the danger posed by Mohau Mokate six minutes later, the former Bafana Bafana defender with a timely interception to keep Deolin Mekoa from reaching his intended target.
Chances, continued to come at a premium with the physical encounter threatening to boil over, but the Clever Boys should’ve opened the scoring in the 41st minute following a defensive blunder.
Phakamani Mahlambi quick to pounce before squaring the ball to Gabadinho Mhango who could only succeed in directing his shot wide of goal, with only the goalkeeper to beat.

Maritzburg were dealt a major blow a minute before the break, as Kurt Lentjies received his marching orders for a reckless challenge on Phumlani Ntshangase.
Hunt introduced former Maritzburg man Cuthbert Malajila following the interval as the Clever Boys aimed to exploit the 10-men of the home side.
Maritzburg, though, continued to hold their own with the hosts not afraid to throw men forward in attack. As a result, Hunt made another substitute before the hour with Siboniso Gaxa sacrificed for another attacker in Elias Pelembe.
Malajila’s introduction worked a treat with the Zimbabwe international finding the opener on the 70th minute. Mahlambi the creator-in-chief once more, setting up his teammate who finished from an acute angle against his former employers.
Maritzburg hit back four minutes later. Mokate turning in from close range after Brian Onyango’s header attempt was cleared off the line. Advertisement

Despite their man disadvantage, Maritzburg continued to probe for the winner and Darren Keet had to be alert to keep out Mekoa’s shot from the edge of the area.
In the end, neither team could find the winner as the two teams shared the spoils in what was their final game of 2016. PSL action will only resume in February next year.