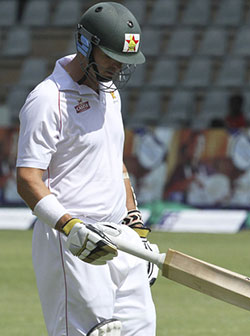 South Africa 397 (Du Plessis 98, De Kock, 81, Nyumbu 5-157) and 44 for 1 beat Zimbabwe 256 (Taylor 93, Steyn 5-46, Piedt 4-90) and 181 (Sibanda 45, Piedt 4-62) by nine wickets
SOUTH Africa maintained their unbeaten Test record against Zimbabwe by sealing a comprehensive nine-wicket win in Harare on Tuesday.
Having started the fourth day 141 runs in arrears and one wicket down in their second innings, Zimbabwe managed to make South Africa bat again but could only muster 181 all out.
That left South Africa requiring just 41 for victory, which they knocked off inside 11 overs for the solitary loss of Dean Elgar (21).
Dane Piedt once again impressed for the top-ranked Test team, as he had on the opening day, returning 4-62 to complete overall figures of 8-152 – the best match haul by a South Africa spinner on debut.
Morne Morkel (3-15) and Dale Steyn (3-38) shared the other wickets to fall in Zimbabwe’s second innings, with Vusi Sibanda (45) and Richmond Mutumbami (43) the only batsmen to make any real impression.
Zimbabwe made encouraging initial progress on Tuesday, losing just one wicket in the morning session.
Piedt was the man to strike, bowling Donald Tiripano for five as the number three batsmen failed to connect with a slog-sweep.
Sibanda and the recalled Mark Vermuelen shared a patient partnership of 40 to steady the ship, only to then depart in successive overs to leave Zimbabwe in peril.
Vermuelen was lbw to a Steyn inswinger, while Sibanda provided off-spinner Piedt with a sharp return catch.
Captain Brendan Taylor failed to follow up his first-innings 93, making just five before being held at short-leg off Piedt, and Morkel then accounted for Regis Chakabva and Sean Williams as Hashim Amla’s men scented an innings win.

Zimbabwe had levelled the score by tea, thanks to a defiant stand between Mutumbami and John Nyumbu (13) that ultimately reached 54.
However, Steyn returned to wrap the innings up in the evening as the final three wickets fell in the space of 12 deliveries.
Mutumbami and Tinashe Panyangara (two) each fell victim to Steyn either side of Piedt striking again to remove Nyumbu.
South Africa appeared set to complete a 10-wicket win but Elgar played on to Tendai Chatara in the 10th over, ensuring Faf du Plessis (five) was left to complete the job alongside Alviro Petersen (17 not out).Advertisement