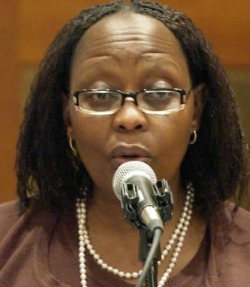 A SOUTH African business delegation led by the Department of Trade and Industry is holding business-to-business meetings in Harare on Tuesday to scout for investment opportunities with Zimbabwean companies.
The delegation will hold a conference in Bulawayo, the country’s industry and manufacturing hub, on Wednesday.
The business-to-business meetings are expected to create the ground for potential investment deals between South African and Zimbabwean companies.
“FDI (foreign direct investment) by South African entities in Zimbabwe between 2003 and 2012 amounted to approximately $619m while inward FDI from Zimbabwe to South Africa amounted to approximately $154m,” Department of Trade and Industry spokesman Sidwell Madupe said.
Deputy Trade and Industry Minister Elizabeth Thabethe, who is leading the delegation, said its mission was to “make sure intra-Africa trade grow(s)”.
South Africa and Zimbabwe have a strong trade relationship, with South African companies commanding a heavy presence in sectors of the Zimbabwean economy such as mining, manufacturing and agro-processing.
Zimbabwe imports most of its consumable and finished products from South Africa.
Aside from Tuesday’s business meetings, there will also be time for the delegation to tee off in a golf tournament hosted by the Zimbabwe Investment Authority (ZIA).Advertisement