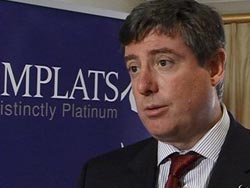 THERE could finally be a sliver of hope for foreign companies in the post-Robert Mugabe era in Zimbabwe, particularly for South African companies, which stuck it out during the country’s darkest of times.

Mugabe often used threats of seizure and the closure of operations to have his way with foreign companies.
In 2012, mining company Impala Platinum was issued with a 14-day ultimatum to comply with Zimbabwe’s 51% indigenisation law or risk losing its mining licence.
David Brown, the then Impala CEO, had to lead a team of executives to Harare from Johannesburg in an effort to stave off the threat facing its subsidiary, Zimplats.
“The problem with Brown is that he talks too much… I don’t need to meet them….. Why are they coming to see me? I am not a zoo,” Saviour Kasukuwere, the indigenisation minister said, as he refused to meet Impala’s executives.
That episode highlighted the perpetual hazards South African companies have often found themselves in as they do business in Zimbabwe.
The fortunes of running operations in Zimbabwe are mixed. South African Airways (SAA) CEO Vuyani Jarana said in January that the airline had R150m worth of ticket sales stuck in Zimbabwe

The airline, which controls about 30% market share in the country, is unable to expatriate the funds because of critical foreign currency shortages.
But for retail giant Pick n Pay, which operates 56 stores in Zimbabwe, the grocery space has been profitable. It raked in R126.8m profit before tax in 2017, up from R103.7m — an increase of 22.3%.
Delta Beverages, the Zimbabwe unit of AB InBev said its group revenue for the fourth quarter of 2017 had increased by 24% and was up 9% for the nine months of 2017.
Alex Makamure, the beverage maker’s group secretary, said the period characterised by “significant political developments” had given rise to “optimism” for an economic recovery.
Foreign investors are taking notice, with Britain and Russia lately beating a path to Harare to scout for opportunities.Advertisement

Russia’s Foreign Minister Sergei Lavrov is expected to visit in March, on the back of a visit by Britain’s Africa minister, Harriett Baldwin.
Risk Appetite
Gary van Staden, senior analyst at NKC African Economics, said there was likely to be a higher appetite for risk and a serious uptick in foreign investor interest before the elections later in 2018.
“The big money will probably take a more cautious approach, even though by waiting they may have to pay a premium,” he said.
About 400 South African companies have operations in their northern neighbour.
SA’s interests are spread out across different economic sectors that include mining, banking, insurance, retail, tourism, manufacturing, agriculture and aviation.
The market leaders in some of these sectors include Zimplats, Anglo American, Stanbic (a unit of Standard Bank), Ecobank (partly owned by Nedbank), Old Mutual, Pick n Pay, Legacy Hotels, Tongaat Hulett and SAA.
In the event of a scramble for Zimbabwe unfolding, analysts say the South African companies would enjoy first-mover advantage, as they are familiar with the country’s business climate.
Positioning is already under way in Harare in preparation for the better days ahead.
In March, MBCA Ltd, a unit of SA’s Nedbank, will change its name to Nedbank Zimbabwe Ltd. Transnet, which is in a joint venture with DIDG, will next week deliver rail equipment — 200 wagons and 34 passenger coaches — to the National Railways of Zimbabwe, as part of the $400m rail tender it won in 2017.
Eve Gadzikwa, president of the African Organisation for Standardisation, said the change in economic climate was good for foreign-owned companies. “It’s a sign that Zimbabwe is ready to do business with the rest of the world,” she said.
“We are likely to see the economy open up to new players and this will bring a lot of competition into the country and also force local players to raise the bar.”

A sector that has caught the eye of foreign investors is mining, where the 51% indigenisation law has been changed. Now it only applies to platinum and diamond mining.
In January, Tharisa CEO Phoevos Pouroulis met President Emmerson Mnangagwa, as the JSE-listed miner scouted for investment opportunities in Zimbabwe.
Pan African Resources, the gold miner listed on the London bourse and JSE, also said it was in “exclusive negotiations” with the joint administrators of ASA Resource Group to take over some of its assets in Zimbabwe.
Phillip Barton, CEO of the De Beers South African unit, said this week it could explore mining up north. “I’m excited about what I’m seeing in Zimbabwe. If we get licences, we would have a further look,” he told Bloomberg.
Australia-listed Prospect Resources has raised $10m for its Arcadia lithium project on the outskirts of Harare.
Zimbabwe’s mines minister, Winston Chitando, said at the recent Mining Indaba held in Cape Town that lithium had attracted the most interest from foreign investors.
Given this hive of activity by foreign companies, could finality to the question of whether to stay put or to leave Zimbabwe have been found?
Tara O’Connor, executive director of Africa Risk Consulting based in London, said Mnangagwa had made the right noises over the economy.
“They are pushing an open door to foreign-owned companies. They have agreed to roll back on the 51% indigenisation law, which will win them favour,” she said.
This article is taken from Business Day.