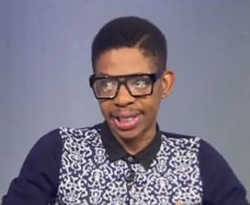 JOHANNESBURG: South African multi-award winning gospel artist Lundi Tyamara died on Friday at the age of 38 after a battle with stomach TB and a liver condition, his family confirmed.
The Tyamara family released a statement on Friday morning confirming that the musician – who was known for his popular hits including “Mphefumlo Wami” and “Ndixolele” – had passed away just after midnight at the Edenvale Hospital.
Tyamara had been admitted to hospital four weeks ago suffering from abdominal tuberculosis (TB) and a liver condition, his manager Anele Hlazo said.
He took a turn for the worse on Monday and was moved to ICU and put on life support.
“We got the call just after 1am this morning. We are all shocked. We never expected this to happen. The family is taking it very hard.”
His death comes a day after a night vigil was held at Central Methodist Church in Johannesburg CBD to pray for his recovery. Condolences for his passing have been pouring in over social media since news broke in the early hours on Friday.
Johannesburg mayor Herman Mashaba tweeted: “Deep condolences to the family of gospel singer and star Lundi Tyamara who passed on earlier. May his soul rest in peace.”
Veteran entertainment journalist Lesley Mofokeng said: “He put up a good fight. He ran his race and now belongs to the ages. Rest in perfect peace Lundi Tyamara.”

President Zuma mourns the passing of Lundi
President Jacob Zuma has released an official statement in which he sends his heartfelt condolences on the passing of local gospel singer Lundi Tyamara.
In the statement Zuma calls Lundi one of the best gospel artists to come out of South Africa. The leader also says that the  singer’s family are in his thoughts and prayers at this tough time.
Here is the president’s full statement:
“We are deeply saddened by the loss of a talented artist at such a young age. This is yet another huge loss for the country in a short space of time. He was one of the best gospel artists that the country has ever produced. We are with his family in thoughts and prayers during this trying period. May his soul rest in peace,” President Zuma said.Advertisement

The family was yet to announce plans for a funeral.
Tyamara’s death follows that of another gospel legend, Sfiso Ncwane, who died last month aged 37 after a short illness with kidney failure.