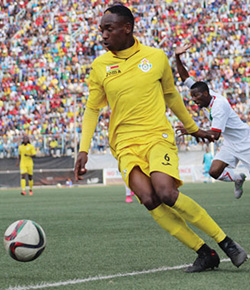 KHAMA Billiat’s name received the loudest cheers, after local hero Kennedy Mweene, when Mamelodi Sundowns’ squad was announced at the Levy Mwanawasa Stadium.
The announcer prefixed every name with mister. He might as well have called the attacking midfielder Mr Dependable.
The Zimbabwean forward knows how to rise to the occasion. He has done that consistently in the Brazilians’ march to the semi-final of the Caf Champions League, scoring crucial goals on the road – in Egypt and in Algeria before the latter was annulled.
On Saturday he scored what could be the Brazilians’ most important goal on that road.
It gives Sundowns hope going into the second leg at home on Saturday – they trail Zesco United by 2-1.
It came when the Brazilians looked set to return from Ndola with nothing.
With two minutes left, Sundowns went on a swift transition. Anthony Laffor received the ball on the right flank, managing to somehow squeeze it to Billiat on the left in Zesco’s box.
The reigning PSL Footballer of the Year looked set to curl the ball into the top-right corner with three defenders rushing him. But he somehow took a ground shot that sneaked into the left side, leaving the Zesco goalkeeper Jacob Banda struggling to stay on his feet.

“We have so many drills like that, whereby (no matter whether I am playing) as a winger or striker, I need to be in the box when the other winger has the ball,” Billiat said.
“I was there. I had to take two touches, yet I had so much to do. I had to control the ball because the surface wasn’t really the best for me to take one touch. I took the chance.
“The coach always emphasises that I need to take a chance in the box, no matter how difficult it is. I did that and all I had to do was pick a spot. But before I did that, I had to play with the keepers mind.
“I normally go for the far post (with a curler) but I had to take a chance in the near post. It paid off. As much as there was a huge amount of pressure, I had to make the right choice because the next thing, I would have lost the chance and we would have returned without a goal.”
That moment showed just how much the 26-year-old has grown under coach Pitso Mosimane. He always had talent but he wasn’t the finished product when he left Ajax Cape Town for Chloorkop three years ago.Advertisement

Mosimane turned him into a reliable finisher who is calm under pressure. Before he fluffed a lot of chances, now he can carry the team. But Mosimane still pushes him.
“I kept on looking at the bench and they kept signing that we need just one goal,” Billiat said.
“It was motivating to look at the bench and see that they believe in us and they just need one goal. The job will be easy (in the second leg because of that away goal).”
But the job isn’t done. Sundowns have to first negotiate Chippa United in the second leg of the MTN8 semi-final and then try and book a place in the Champions League final.
Billiat has a shot at not only ending this year as an African champion with his club, but also to start the new one on that note with Zimbabwe in the Africa Cup of Nations where he leads a potent attack. That would see him get the loudest of applauses wherever he goes.