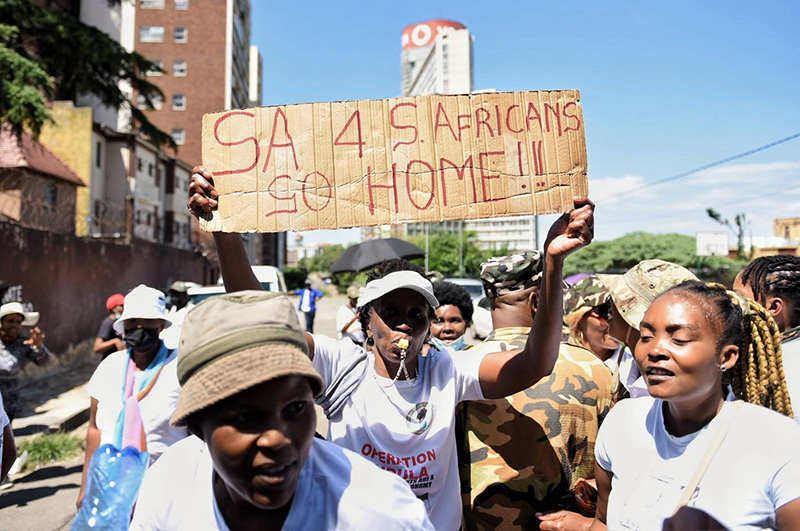 More than a thousand foreigners have been displaced in Bredasdorp after homes belonging to Zimbabweans and Malawians were destroyed.

Police were deployed to Zwelitsha township to diffuse violence which left at least two people injured and homes destroyed.

Barely two weeks ago clashes between Zimbabwe and Lesotho farmworkers over jobs in Robertson left many homeless and 15 injured.

However, the Zimbaweans and Malawians feared for their safety and remain at the municipal hall and a local mosque. Phillips said about 450 displaced families, mostly women and about 40 babies, were being accommodated at the hall and mosque.

He believed that the violence had not spilt over from Robertson but it could be related to long-simmering unhappiness over jobs.

This came after Operation Dudula, which began in Soweto as a movement to root out illegal immigrants living and operating businesses in townships, had planned to expand to different parts of KwaZulu-Natal this weekend.

The group’s leader, Nhlanhla “Lux” Dlamini, was arrested on Thursday on charges of housebreaking, theft and malicious damage to property. But a lack of a permit from authorities in KZN curtailed the group’s plans despite them claiming Dlamini’s arrest had been politically motivated.

n the Western Cape, ANC councillor Mlamleli Mokotwana said the violence in Zwelitsha began with a march on Thursday to highlight dissatisfaction with service delivery but was hijacked by a group who turned the focus on the employment of foreigners by local businesses and the fact that some owned properties.

Mokotwana said the violence could also be “politically motivated”.

He said some foreigners were employed on farms, in local restaurants, and the private sector.

Swartbooi said the violence broke out again on Friday and two men, aged 42 and 24, sustained injuries.

Phillips said: “Attempts to get a peaceful settlement between the South Africans and foreign nationals who have been forced out of their homes are continuing. Spiritual leaders and community elders are also assisting with the mediation.”

Phillips said a collective decision was made that it would be safe for the foreigners to remain outside Zwelitsha for their safety until a solution had been found.

SA Human Rights Commissioner Chris Nissen was expected to hold a meeting with the leaders and municipality today.

Phillips said: “The Zimbabwean nationals remain fearful of moving back to the informal settlement. We hope the meeting will yield a positive solution.”

Phillips said the larger Bredasdorp community had displayed goodwill by donating food, blankets, toiletries and other supplies to affected families.

He added that stolen goods and many weapons were confiscated.

Community worker Yunus Adams, who had been assisting affected families, welcomed the support from locals.

“The support has been tremendous. And it shows that it’s only a few individuals who instigated the violence.”

The municipality condemned the violence and called on the police to make arrests.

However, no one had been arrested.