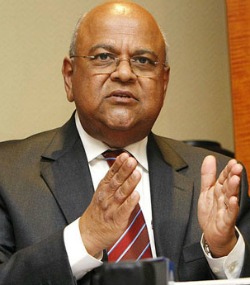 SOUTH Africa’s opposition Democratic Alliance (DA) party is pressing Finance Minister Pravin Gordhan over details of a US$100 million loan extended to Zimbabwe which may be used to finance key elections this year.
DA finance spokesman Tim Harris said he had submitted a parliamentary question to Gordhan to clarify the terms of the funding.
“If we indeed intend providing the loans to Zimbabwe then Minister Gordhan has a duty to explain to South Africans the motivation for extending such generous financial support.
“There are three main issues that urgently need to be clarified: the motivation for the loan, the terms of the repayment and any conditionality attached to it.”
“We believe that any financial support provided to Zimbabwe should be conditional on the money being spent on specifically defined projects that will improve the prospects for real democracy in Zimbabwe through free and fair elections.”
Harris South Africa should extend the credit line without strict political conditions.
The party also challenged Reserve Bank governor Gill Marcus on the deal when she appeared before the standing committee on finance on Tuesday.
Responding to questions from a DA MP, Marcus said: “We need to be clear. This is a government to government discussion. Should there be any agreement on terms and conditions, whatever they are, they would be sorted out at government level.”
“Once that is done we would simply be the executing arm, we are not involved in the discussions… we don’t know any more than you do. I thus can’t answer your questions about the conditions,” she said to David Ross, another DA MP on the committee.
Zimbabwe’s treasury chief, Tendai Biti, this week said President Zuma’s cabinet had approved the local deal which has been on the table since last year.
“Pursuant to discussions in September 2012, I’m aware the South African cabinet has made a decision and it’s a positive decision,” Biti told a news conference in Harare.
Last year, Biti said he had approached regional economic giant South Africa and oil-rich Angola for US$150 million to help plug gaps in State finances amid a lack of aid from Western donors.Advertisement