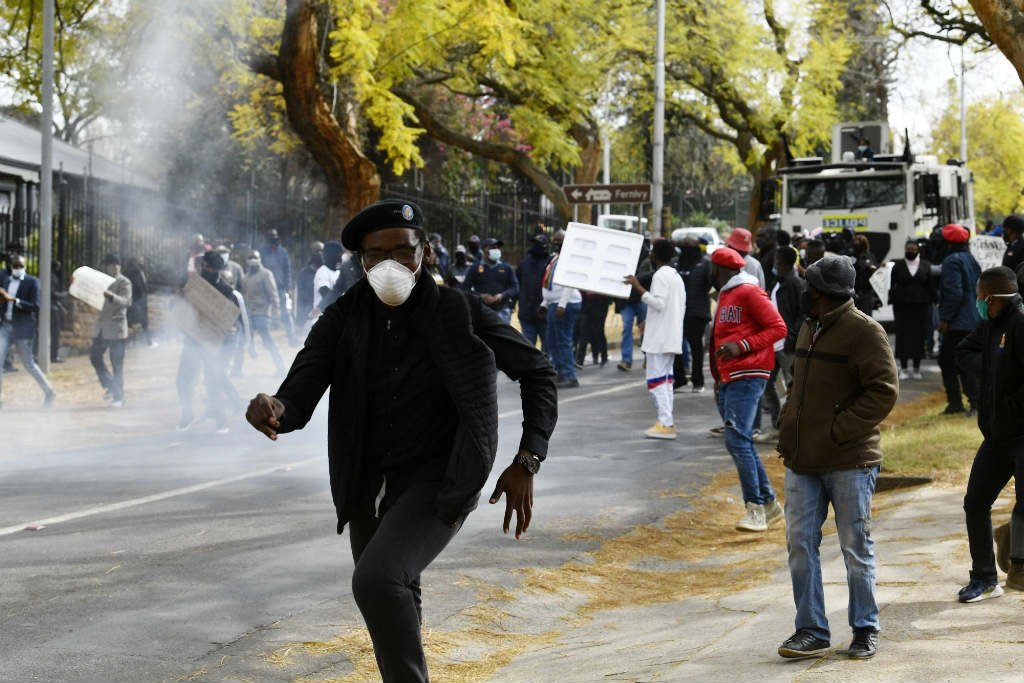 SA police launch tear gas at protesters in solidarity with Zimbabweans at the Zimbabwean Embassy on August 7, 2020 in Pretoria.
Spread This News

Close to 100 mainly Zimbabwean migrants in South Africa gathered to protest economic hardship and a recent crackdown on dissent and political opposition back home.

Earlier this week, Zimbabwe’s President Emmerson Mnangagwa vowed to “flush out” critics who he described as “dark forces” and “terrorists” after the authorities thwarted anti-government protests.

On Friday, police were seen pushing and shoving the protesters from the front of the Zimbabwean embassy building, situated in a leafy Pretoria suburb not far from the Union Buildings.

Draped in their county’s national flag, protesters waved placards, some reading “Mnangagwa: You are going to The Hague! Murderer! Thief!”

President Cyril Ramaphosa on Thursday said he had appointed two special envoys to go to Harare “following recent reports of difficulties that the Republic of Zimbabwe is experiencing”.

Mnangagwa took over from long-time ruler Robert Mugabe after a coup in November 2017 and many Zimbabweans complain that the country’s situation has only gotten worse since.

The Zimbabwean government has dismissed allegations of rights abuses and a crisis in the country as “false”.