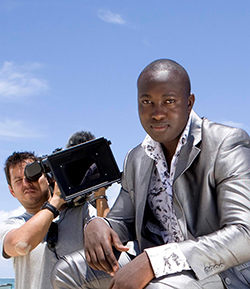 THE driver of a VW Polo which crashed into TV presenter Simba Mhere’s car, killing him and another passenger, faces charges of reckless and negligent driving and culpable homicide, according to reports.
The popular presenter of South Africa’s biggest lifestyle television programme Top Billing died in a car accident on his way to OR Tambo International Airport on Saturday morning, the SABC reported.
Eyewitness News reported that Mhere was travelling on William Nicol Road when his Mitsubishi collided with a VW Polo and a Mazda.
Johannesburg Metro Police confirmed to EWN that the driver of the VW Polo will be charged. The driver reportedly crossed over the middle island and collided with Mhere’s car.
The third passenger in the car, Mhere’s father, survived the crash.
According to reports, Mhere, 26, was on his way to the airport to board a flight to Cape Town, where he was due to attend the J&B Met horse race.
According to his profile on the Top Billing website, Mhere was born in Zimbabwe and moved to Johannesburg as a baby.
He attended Randpark High School and studied at the University of Johannesburg. He won the Top Billing Presenter Search in 2010.
Mhere’s tragic death sparked an outpouring of tributes from around the world as people took to Twitter to pay tribute to him, sparking several trends in the UK and around the world.
His manager, Lorraine Meizel, told SABC: “He was going places. He was the most amazing human being.
“Gentle, kind and loving, honest, hardworking. He was everything; he was the most extraordinary person.
“I saw him on Thursday. And I always used to kiss him on the neck and always used to love it and shake.”
Mhere studied accounting at the University of Johannesburg before going into presenting, working as a voice-over artist and a master of ceremonies for South African events including the Mrs South Africa pageant.
As the news of his death spread in South Africa on Saturday, people took to Twitter to pay tribute to him, sparking several trends in the UK and around the world.Advertisement