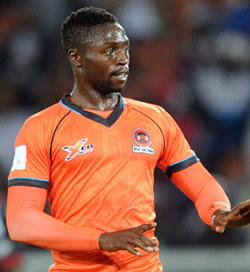 CUTHBERT Malajila will be out of action with a knee injury for Mamelodi Sundowns’ trip to Bloemfontein Celtic in the Absa Premiership on Wednesday.
But both Tebogo Langerman and Teko Modise are available for the trip, officials told supersprt.com on Tuesday.
Malajila was hurt and went off at half-time in Sundowns’ last match – their 2-0 home win over Chippa United in the first round of the Telkom Knockout on October 3.
Zimbabwe international Malajila, 30, has scored twice for Sundowns this season.
Playmaker Modise missed the game against Chippa because of an eye infection but has since returned to training.
Sundowns will seek a measure of revenge against Celtic, who beat them 5-0 in Pretoria in April in one of the biggest shocks of the last season.
The result effectively scuppered Sundowns’ hopes of retaining their league title.
Sundowns sit sixth in the standings after six games with 10 points. Celtic have played one match more and are joint top with 14 points.
Elsewhere, a hamstring injury will keep defender Carlington Nyadombo out of the Polokwane City squad for Wednesday’s Absa Premiership clash at home to Free State Stars.
Polokwane City are seeking only their second win of the season after picking up just five points from their opening six matches.
Zimbabwe international Nyadombo, 28, moved from AmaZulu to Polokwane City in August, signing a one-year contract.
He has played in five matches for City so far this season.Advertisement