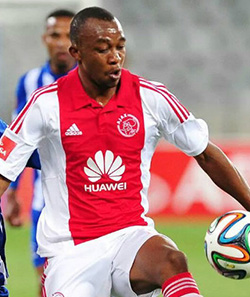 AJAX Cape Town’s new signing Milton Ncube is the only player that has not reported for pre-season training at Ikamva.
The Zimbabwe international signed a two-year contract with an option for another two years in May, but is still in his homeland awaiting his visa and work permit.
Ajax spokesman Thabiso ‘Shooz’ Mekuto is confident his paperwork would be sorted out and the full-back will join his new team-mates for preparations ahead of the new season.
“Ncube is finalising his papers back home,” Shooz confirmed to Football 411. “It’s just a matter of when, because he already has a contract.”
Mekuto added that there were other players who were invited to train with the squad, for head coach Roger de Sa to have a closer look at.
“You know the drill around this time of the year,” he continued. “There are a couple of trialists, about four youngsters and a centre-back that came with the coach.”Advertisement