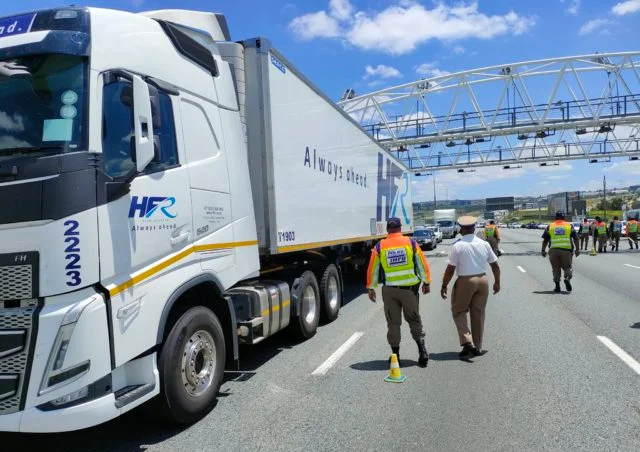 Truckers protesting against the hiring of foreign nationals as drivers blocked a key route to South Africa’s biggest port on Wednesday, prompting a body representing the nation’s road freight industry to seek President Cyril Ramaphosa’s intervention to find a solution to repeated closures of arterial roads.

All lanes of traffic on the N3 highway are closed near Van Reenen in the KwaZulu-Natal province, according to the N3 Toll Concession, which manages the route.

Similar blockades took place on several national routes last year that led Ramaphosa to instruct a panel led by Employment and Labor Minister Thulas Nxesi to address the All Truck Drivers Foundation’s long-standing grievances that include the employment of foreign drivers and issues relating to professional driving permits.

South Africa’s Road Freight Association in an open letter to Ramaphosa said the N3 has been blocked for more than 24 hours with over 350 trucks blocked on either direction of the route. “

Our drivers are exposed to severe cold, possible violent looting or other aggravated assault and do not have the means to survive for days stranded in a truck in the middle of nowhere,” the association’s Chief Executive Officer Gavin Kelly said.

He called on Ramaphosa to instruct the ministers of police, transport and defense and military veterans to restore order and address the concerns of the body.

The highway’s link to Durban port is also key to shippers from many African countries including the Democratic Republic of Congo, Malawi, Zambia and Zimbabwe.

The frequent challenges on key routes mean “we will lose trade and business to and through South Africa,” Kelly said. “Our ports will become ghost towns — and the surrounding businesses relating to those activities of trade and support will close. More unemployment.”

The body estimates that the repeated disruptions may have cost the economy around 300 million rand ($18.8 million)

Sifiso Nyathi from the All Truck Drivers Forum and Allied South Africa (ATDF ASA), however, told News24 they supported truck drivers who blocked the N3.

“The people who created this problem…is the truck owners and not the drivers. It is the employers who created this blockage and protest, because they are arrogant and not prepared to employ South Africans.

“Yes, there are good employers who employ South Africans who comply with the law of this country, but there is a certain percentage of employers who think they are living on their own planet and can do whatever they like,” Nyathi said.

Nyathi said the problem would have never occurred if truck companies and owners had employed South Africans.

Edward Muchatuta, the national co-ordinator of the Zimbabwean Exemption Permit Association, said the lives of truck drivers had been put ahead of the economy.

“The government is doing nothing to avert that situation because it is migrants who are being attacked. If it were migrants attacking locals, this would have been attended to.

“Our demand is for the South African government to intervene and stop ADTF from what they are doing,” Muchatuta said.

He claimed he survived a near-death experience when armed men who were wearing balaclavas attacked him in his stationary truck on the R23 in Benoni, Gauteng, in July 2020.

“What is more important is not the sabotage of the economy of South Africa, but the attacks on migrants. We are losing lives. I don’t think any amount of money can buy life.

“Right now, we have orphaned children because their parents were killed. The lives we are losing are more important than any economic sabotage,” he said.