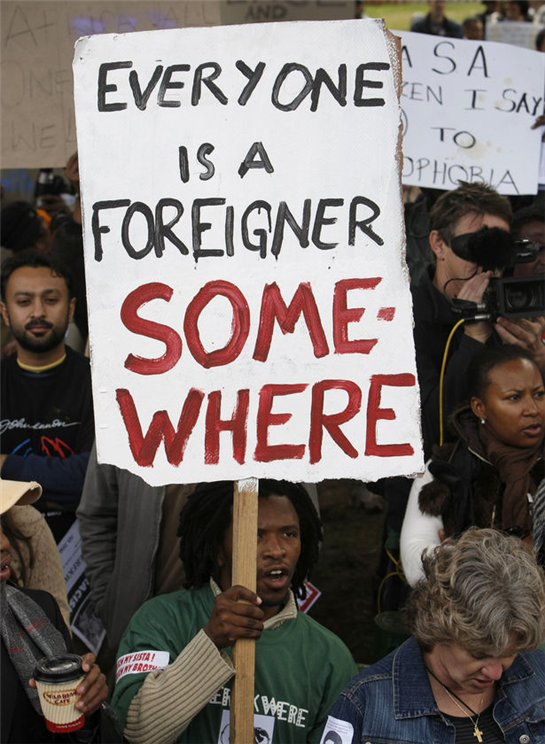 As soon as black students started attacking monuments of white supremacy, and idols of the religion of Capitalism, they were going too far, the next thing was to attack white bodies, people.
Once again, the weapon of the last resort, black anger was marshaled, sponsored and deployed to the weakest link; the foreigners, the statues and what they represent are no longer the topic.
THE poor-on-poor, and black-on-black violence that is presently spreading in South Africa must jolt all of us in the thinking world to some contemplation about our thinking in politics. In the true fashion of the Marikana massacre where poorly paid black police officers gunned down poorly paid black miners while the real owners and sponsors of the violence remained concealed but not entirely unknown, the perpetrators of the current violence have names and faces, it is the sponsors and the owners of the agenda that remain in the dark, but they are knowable, I argue. The capital falsehood surrounding this violence that has potential to escalate into a continental crisis is that it is mysterious, spontaneous and that the South African state can do little or nothing to stop it.
That the ongoing golgothic spectacles of violence on foreign nationals stand to dethrone South Africa from being a symbol of liberation in the world does not need emphasis. What cries out for emphasis is that South Africa is about to degenerate into a site of many of the world’s cultural and political conflicts, which might shape the Republic into a location of terror and the war against it. As a country that is presently home to peoples of all languages, races and cultures of the entire globe, any politics that privileges violence along the lines of cultural and national differences is bound to spark a clash of civilizations with bloody consequences for the continent and the world.
The ANC administration, in its inability or unwillingness to crush the violence, might believe that it is carefully juggling between keeping the votes of the angry and increasingly violent mobs and keeping a healthy diplomatic conscience by mouthing the rhetoric of protection of foreigners, might soon realize that they preferred party security over national security and continental order.Advertisement