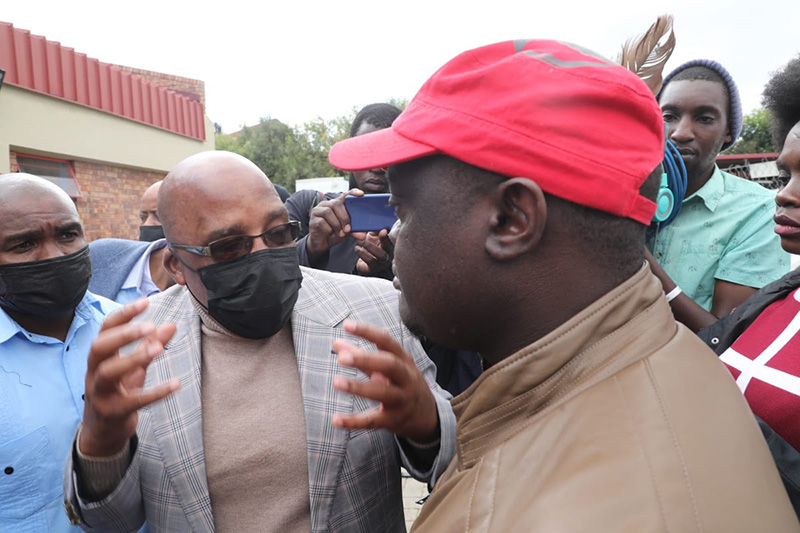 SOUTH AFRICA: A man has been thrown out of the meeting between the government and residents of Diepsloot as tempers flared soon after he introduced himself as a Zimbabwean communist party representative.

Emotions ran high inside the hall when the man tried to speak where ministers and government officials came to hear the grievances of the community about crime which led to violent protests this week.

The man, wearing a red cap, was taken out by the police and followed by home affairs minister Aaron Motsoaledi, who advised him to understand why he cannot be part of the closed proceedings.

The community could be heard shouting as the man came out of the hall.

He then told Motsoaledi outside that he was from Fourways and that he was invited to the gathering.

“This is a community meeting of people who stay here only… People are angry. We ask you to leave because this is a meeting of the community. Now we are unable to continue with the meeting because they are very angry. I’m just asking you to leave very peacefully. Tell whoever has invited you that they invited you to the wrong meeting,” said Motsoaledi.

Just after Motsoaledi spoke to the man, police whisked him away while community leaders shouted “what is this one doing here”.

Two community members told Sowetan that the community got angry after the man introduced himself as a Zimbabwean.

“He introduced himself as a Zimbabwean and the residents got angry,” one of them said.

Motsoaledi later addressing the community outside that by asking the man to leave, he was saving the situation as the community was angry about his presence.

Police minister Bheki Cele and Motsoaledi are in Diepsloot to find a lasting solution on the problems that have resulted in violent protests this week and killing of Zimbabwean national Elvis Nyathi.

Residents have been complaining that crime in the northern Johannesburg township has reached unbearable levels and the government has to act immediately.

They have blamed foreign nationals for the high levels of crimes such as armed robberies and murder.

“I represent young people in this community. It is the young people that are asking why are you allowing these Zimbabweans to kill us. We are not joking here. We have invited the minister here. Zimbabweans must leave once and for all. We are saying that South Africans must start walking around with ID documents.

“We are calling for operation stop, search and arrest. Police must randomly search [and ask] who are you, where are you from, where is your documentation…That is how we want it in Diepsloot,” said Thabang Molefe a convener of ANCYL structures in the area.

The meeting between the government and Diepsloot residents is happening behind closed doors at the local community hall. It has has been on for three hours.

Outside the gate, there are residents who are demanding to get into the venue but there is restricted access to the hall.

Earlier, police conducted raids in the township demanding identity documents from people they met on the streets.