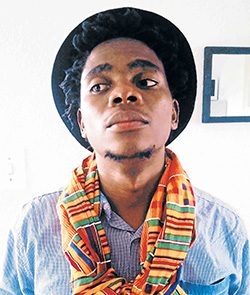 CONGRATULATIONS hurtled in via Twitter on Tuesday for South African writer Lidudumalingani Mqombothi, who has won the 2016 Caine Prize for African Writing, one of the most prestigious awards for African literature.
The Caine Prize for African Writing is a registered charity that aims to bring African writing to a wider audience through an annual literary award.
This year the prize received a record number of entries: 166 short stories from writers representing 23 African countries. Last year, 153 qualifying stories were submitted to the judges from 17 countries, according to the prize’s website.
“Congrats @Lidudumalingani such a powerful, beautifully narrated tale of family, mental health & the body #caineprize,” Tweeted Sarah-Jane Roberts, co-director of the UK’s Manchester Literature Festival.
“But Lidudumalingani for the @CainePrize win, for the way he blends the real w/ the false, & let’s the frightening sit pretty in that thick,” Tweeted Canada-based Ivorian Clarisse Baleja Saidi, a writer and academic.
Mqombothi is known as writer by his first name, Lidudumalingani. His short story Memories we Lost was published in Incredible Journey: Stories That Move You, published by Burnet Media last year. Judges chairwoman Delia Jarrett-Macauley announced Lidudumalingani as the winner of the £10,000 prize at a dinner in Oxford, England, on Monday night.
“Memories we Lost tells the emotionally charged story of a girl who acts as protector of her sister, whose serious mental-health problems cause consternation in a South African village,” the Caine Prize said in a statement.
“Her situation deteriorates as her care is entrusted to Nkunzi, a local man who employs traditional techniques to rid people of their demons.”
Jarrett-Macauley said the story “explores a difficult subject — how traditional beliefs in a rural community are used to tackle schizophrenia.
This is a troubling piece, depicting the great love between two young siblings in a beautifully drawn Eastern Cape.
Multi-layered, and gracefully narrated, this short story leaves the reader full of sympathy and wonder at the plight of its protagonists”.
First-time Caine Prize judge Muthoni Garland, a Kenyan author, said she had been “hit” by how many of the 2016 entries “ticked the unexpected box.Advertisement

Yes, I had pre-conceptions of what a Caine prize ‘was like,’ and came into it prepared to do my bit to shake things up. But the stories submitted covered a wide range of genres, voices, styles.
The future, past and present were all in there. Most of the stories that got our attention took risks.
They risked upsetting, risked sounding un-African, risked taking new forms. (In fact, African writers seem to be taking more risks than most others out there — read Nnedi, Awuor, Abubaker, Selasi et al — just saying).”
Lidudumalingani was joined on the 2016 shortlist by:
• Lesley Nneka Arimah (Nigeria) for What it Means When a Man Falls From the Sky, published in Catapult (Catapult, USA, 2015).
• Tope Folarin (Nigeria) for Genesis, published in Callaloo (Johns Hopkins University Press, USA, 2014).
• Bongani Kona (Zimbabwe) for At Your Requiem, published in Incredible Journey: Stories That Move You (Burnet Media, South Africa, 2015).
• Abdul Adan (Somalia/Kenya) for The Lifebloom Gift, published in The Gonjon Pin and Other Stories: The Caine Prize for African Writing 2014 (New Internationalist, United Kingdom, 2014)