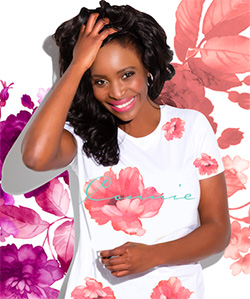 AS the brains behind local makeup company Connie Transform, Constance Mapule Bhebhe creates products that cater to the needs of African women
The South African cosmetics and personal care products market was worth R25.3 billion (US$1.8 billion)  in 2010, according to a report by the Department of Trade and Industry.
“I founded Connie Transform in 2016 with the aim of allowing local women to feel represented,” explains Bhebhe. “As an African woman, I want to see cosmetics on local real women not in some catalogue from London or New York. There are a lot of opportunities for indie brands like ours to fill that gap and I believe the industry is poised for significant growth.”
Establishing a brand
Originally from Zimbabwe, Bhebhe started her first business buying furniture from liquidators and selling it on Craigslist, while she was living in Canada. She later relocated to South Africa and launched a fitness company called Cobe Fit, which sells body-shaping products called Thermothins and Thermosculpts.
She soon realised that the high-end beauty products that she had purchased in Canada were not available in South Africa. Frustrated with the limited choices available, she launched Connie Transform with six shades of high-quality, long-lasting lipsticks.
“My only challenge was that I wasn’t really a big makeup girl. I didn’t wear lashes or contour or highlight, so I wondered if people would take me seriously. When it came to the formula for the products, however, we got it right within the first three attempts,” she says.
Today, Connie Transform offers 16 lipstick shades that are available through 20 distributors nationwide, as well as in Botswana, Lesotho and Namibia. The company is planning to launch 3D Mink lashes and lip-gloss in the coming weeks.
She says the most important lesson she’s learnt is how valuable it is to learn new skills. Bhebhe has taken courses in photography, web design and videography, so she shoots and edits videos and images and she built the websites for both her companies, saving  a lot of start-up capital.
“When it comes to running your own business, learn as much as you possibly can so that you can do things yourself and reduce your costs. Once you’ve reached your maximum capabilities, then hire experts,” she advises.Advertisement

She adds that as an entrepreneur, it’s important to spend more time alone, as you will have to work really hard, often in solitude. “You should be your biggest critic, as well as your biggest motivator. Don’t ask for reassurance from others. Talk less and do more.”