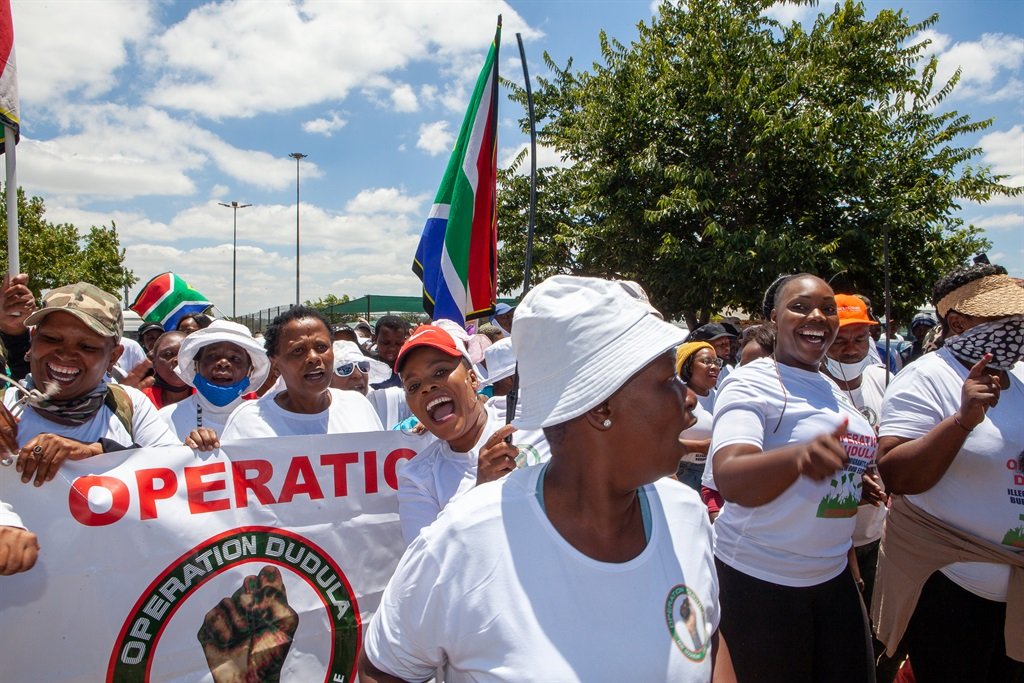 JOHANNESBURG: Legal representatives for the Zimbabwean Truckers Association say they are trying to serve papers on the leaders of the Operation Dudula (‘Push away’) movement to stop them intimidating and harassing foreigners, but cannot locate them.

The Dudula movement has alarmed foreigners in South Africa to the point where a number of African embassies are understood to have urged the government to rein in a disturbing xenophobic streak that has resurfaced in South Africa in recent months, egged on by politicians.

“I have been instructed by the Zimbabwean Truckers Association to take legal action to challenge the acts of intimidation against foreigners during Operation Dudula,” says Advocate Simba Chitando.

“We have all seen the ugly acts of harassment, vigilantism, and xenophobic violence during this operation, which targets members of the Zimbabwean Truckers Association, their families, and foreigners from many African countries.”

Papers ready to be served

The papers are ready to be served on the leaders of Operation Dudula, but identifying and locating them has so far been easier said than done.

The truckers association wants the court to interdict the organisers of Operation Dudula from harassing and intimidating its members and their families.

Chitando expects that a successful court ruling will benefit all foreigners living in SA.

“It is hard to understand how this group could get permission from the police to march, if it can be called a march, without details of the organisers, including their service address,” says Chitando.

The association has condemned the police’s handling of the Operation Dudula marches, by not advising affected members of the public, including foreign nationals and their employers, of the details of the intended march before it takes place.

“It is impossible for the victims of this terrorising operation, with an even more threatening name, to take steps to protect their property, and evade participants of the operation.”

“Our instructions are now to take legal action against the SA Police Services (Saps) for failing to protect foreign nationals, as they are obligated to do, as well as their employers, during Operation Dudula.”

“Nobody in a constitutional democracy, during 2022, deserves to live in the fear of bandits who bring into question South Africa’s stability as an investment destination.”

Chitando says foreigners in SA sense the mainstreaming of xenophobia in ways that are sometimes brutal and sometimes more subtle.

Last month, EFF president Julius Malema forced his way into several restaurants in the Mall of Africa in Midrand to conduct an unofficial audit of the number of foreign versus local workers in these establishments.

This seemed to contradict the EFF’s stated position in favour of African immigration, though the EFF said its concern was more about worker exploitation, and that it had not deviated from its denunciation of Afrophobia.

The Patriotic Alliance and ActionSA want tougher action on illegal immigration, and the Inkatha Freedom Party wants the employment of foreign nationals to be regulated.

This became a key issue during the 2021 local government elections, with anti-immigrant groups taking inflammatory rhetoric and translating it into mob justice.

Human rights lawyers have condemned the intimidatory tactics employed by groups such as Operation Dudula, which has conducted “clean up” operations in Soweto to remove foreigners, before moving to the Joburg CBD and the suburb of Orange Grove.

The movement claims foreigners pay no tax and deprive locals of job opportunities.

Zimbabwean truckers working in SA say they have suffered years of xenophobic abuse, resulting in 200 of their colleagues being murdered.

Foreign truckers point the finger at groups such as the All Truck Drivers’ Foundation (ATDF), which has called for a ban on foreign drivers but has publicly condemned violence against foreign truck drivers.

There is also a growing belief that the ANC government has done little to calm the situation. It recently ended the Zimbabwe Exemption Permits (ZEPs) which was an effort to regularise the residence status of those Zimbabweans residing illegally in SA due to political and economic instability at home.

Zimbabweans have until the end of this year to apply for alternative permits, though that case is being challenged in court by the ZEP Holders Association and non-profit organisation African Amity on the grounds that ZEP permit holders have a legitimate entitlement to permanent residence in SA.

In 2021 the government also announced plans to clamp down on foreign drivers in SA.

The road transport industry has been accused of favouring foreigners over South Africans, though the Road Freight Association points out that of the roughly 63 000 drivers in SA, only 10% are foreign.

“Operation Dudula is a programme initiated by disgruntled South Africans who believe that the foreigners, particularly undocumented Africans, are taking away their opportunities. They want to drive them out of the country,” he adds.

“In our view it originates from policy failure on the part of the government to regulate and handle the immigration properly, including defining their rights and opportunities. In its nature it [government policy] is xenophobic,” says Moloto.

“Other non-Africans are not seen to be competing for the same opportunities with the rest.”